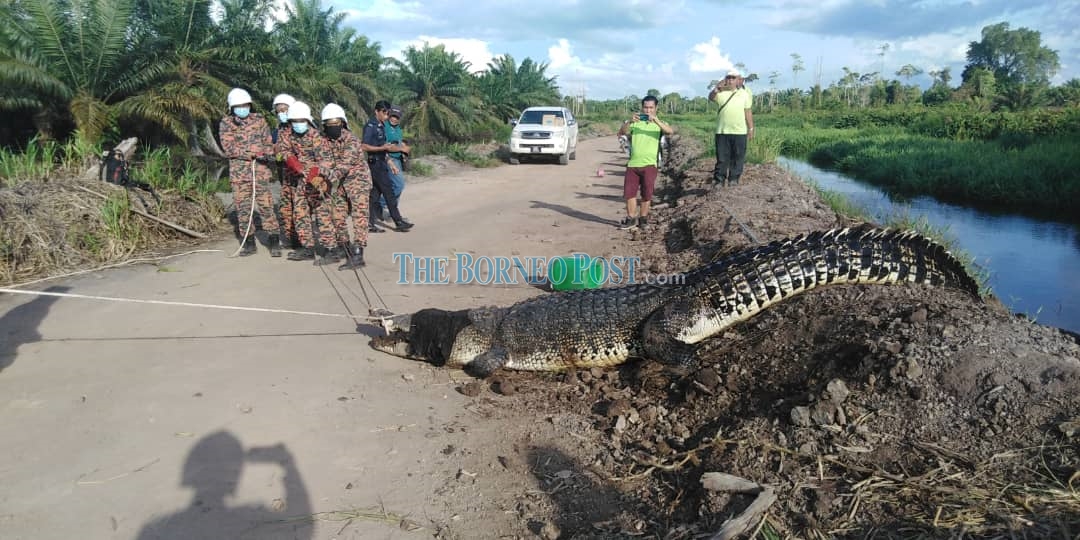 The massive crocodile being rescued from the drain near the oil palm plantation.

MIRI (Dec 12): A 14-foot-long saltwater crocodile caught last Thursday by the Sarawak Forestry Corporation (SFC) and Batu Niah Fire Station personnel at a drain near an oil palm plantation along the Bintulu coastal road, has been relocated to Benaya Farm or Miri Crocodile Farm in Kuala Baram.

A SFC spokesperson said the female crocodile was earlier found entangled in a trap at about 3.20pm on Dec 10.

“With the help of firemen from the Batu Niah Fire and Rescue Station, the female crocodile was successfully rescued and has been sent to Benaya Farm in Kuala Baram,” the spokesperson told The Borneo Post today (Dec 12).

According to the spokesperson, the crocodile was believed to have been searching for food in the area.

“It is believed that about seven to eight dogs have been eaten by the crocodile. It has been a source of food for the crocodile as the drainage is connected to the main river of Niah,” the spokesperson added.

Meanwhile, SFC reminded people to report immediately to the nearest SFC office should they spot any crocodiles encroaching into their areas so that the necessary steps could be taken.

They are reminded against harming the reptile, which is protected under the Wild Life Protection Ordinance 1998.