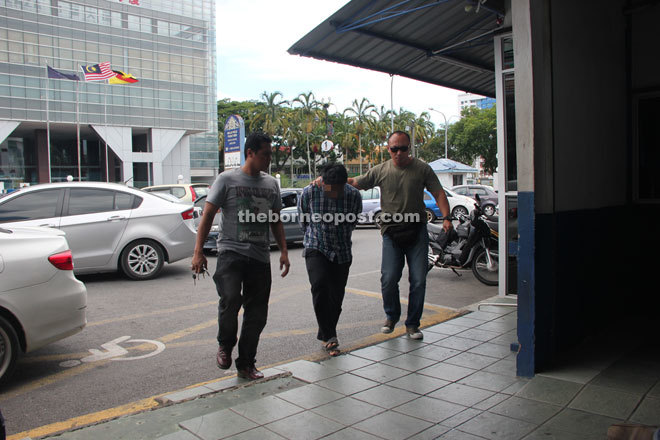 Police escorting the 27-year-old suspect (centre) to CPS Miri after being arrested for allegedly beating his wife after she forgot to buy him a Nutella spread.

MIRI: Miri Police arrested a 27-year-old engineer yesterday for allegedly beating his wife when she forgot to buy him Nutella – a chocolate spread.

He was picked up by police at their rented house in Lutong at about 1.30pm yesterday.

It is learnt that the victim was beaten by the suspect inside their car on Tuesday. She was bruised on her hands and legs.

It is learnt that the suspect had been violent towards the victim and their six-month old child over the past six months.

The suspect was said to have treated the victim badly after she refused to have sex with him due to fatigue.

He has been taken to Miri Central Police Station (CPS Miri).

In a separate case, a 27-year-old woman was bruised on her right hand after she was bitten by her 67-year-old boyfriend in a fight on Tuesday.

It is understood that the suspect had initially wanted to glue the victim’s hair and face with ‘super glue’ but she managed to run away.

After she entered her car, the suspect ran after her and threw stones at her car, causing its windscreen to break.

It is learnt that the suspect had gone amok following several semi-nude pictures uploaded on Facebook by the victim.

The suspect was brought in for questioning while the victim was treated as an outpatient in Miri Hospital.