Employers do you agree?

So i feel like just venting, also i find this post so very-very relatable (ex-boss used to be just like this). Also i stumbled upon this post and now im healing my sides. So how do you guys think? Are nowadays young jobseekers just feel so dang entitled and unwilling to learn? 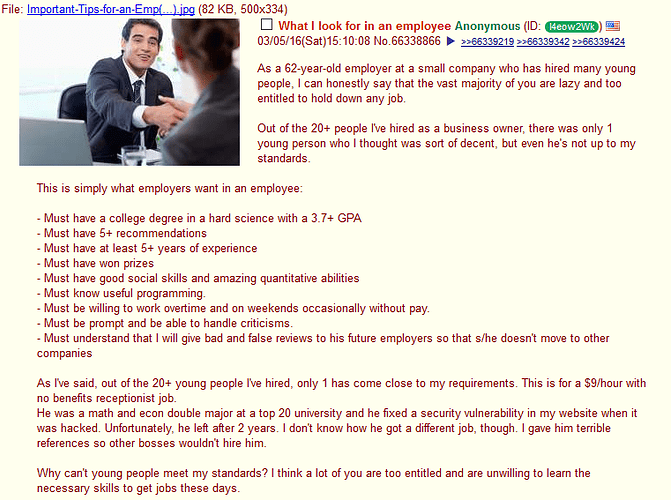 I tend to think smart, talented and hardworking ones have mostly climbed up the corporate ladder quickly or start their own business successfully with calculated luck. What’s left are those who are still in limbo or not.

Anyway, I think hiring a Personal Assistant sounds much better than a Receptionist because of career prospect as one gets to learn the trade and potentially be a business partner to keep the company working for another generation. Well, it’s just wordplay.

Obvious the OP took a satirical stereotyped perspective on the matter. As i personally don’t believe a well managed multilevel corporate would put such expectation on their candidates, granted what position are they looking to be filled in. My (the post’s) beef is against small time business owners (stereotyped as post middle-aged people) who put excessively high expectations for a job that pays ridiculously low by American white collar standards (Mcdonald burger flipper pays $15/hour).

And the point of the post is that he IS hiring someone for a sounds-like-he-do-nothing receptionist job. And still expect him to go waaay against his pay grade to “fix a security vulnerability in the website”, i guess without any incentives either. and THEN gave him bad review just because.

It really struck a chord with me because i used to work for exactly this kind of person. down on my luck and whatnot. I knew that i could do more if given the executive authority but nope, job is to sweep the store front and storekeep, never given even a chance at anything, whatmore im selfish enough to not do things that profit someone who gives 2 ratass about me. Was denied overtime and he even have the balls to cheat me off my social security. Yes sure thing he called me “stupid” all the time but i didn’t think he’d REALLY take me as an idiot. Kinda regretted i choose to be the more noble person instead of just suing the hair off his scalp. Alas, let bygones be bygones. Haven’t looked back since now that im actually working for a corporation with benefits i hadn’t even knew i deserved.