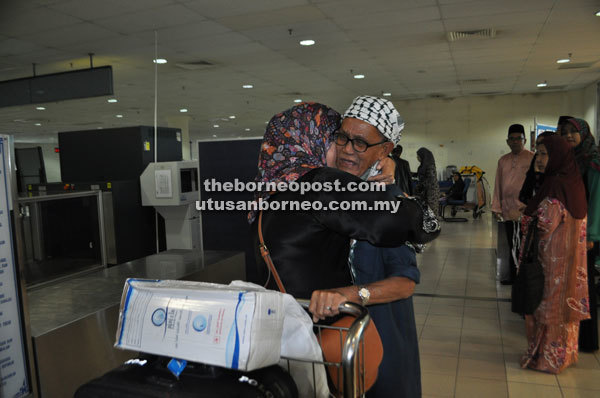 MIRI: It was an emotional homecoming for all 33 haj pilgrims from this division yesterday, as they were reunited with their loved ones here after more than a month of separation.

Many family members, relatives and friends were unable to contain their emotions upon seeing the pilgrims walk out of the arrival hall of the airport here.

For Tudan native Jamidah Aman, she was glad that she was able to complete all the haj rites during her pilgrimage in Mecca but more than

that, she was also thankful to Allah for the opportunity to do so.

“I had waited for eight years to go to Mecca. Allah has granted my prayers,” said the 67-year-old, who also gave her thumbs-up to LTH for taking good care of the Malaysian pilgrims in Mecca and Medina.

However, it was a heart-wrenching moment for Kasa Nabai, a 70-year-old resident of Kampung Dagang in Bekenu, whose wife Lumat Timbang passed away on Sept 24 in Mecca.

Lumat, who died due to complications from pneumonia, was the only pilgrim from Sarawak who died while performing the haj.

Kasa, a father of six, told The Borneo Post that his wife fell unconscious while performing a prayer. She was later pronounced dead upon arrival at a hospital in Mecca.

“It’s really sad. I had wanted both of us to come back and have a family reunion after haj. Nevertheless, this is God’s will. I accept this loss and I will always remember her in my prayers,” he said, before bursting into tears.

Ahmad Lai then consoled Kasa, expressing his sadness over the elderly man’s loss.

“I convey my deepest condolences to Uncle Kasa and his family over their loss.”

The parliamentarian also praised LTH for their excellent services in managing the pilgrims and ensuring that they could perform their religious obligation smoothly.