Edward set to take on Bukit Semuja for DAP 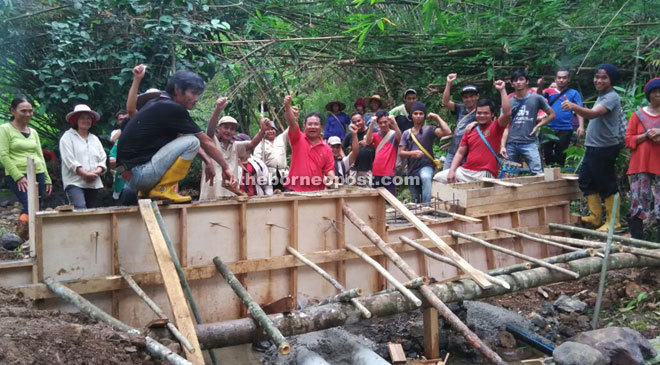 A file photo of Edward (fifth left) and villagers of Kampung Sangai during construction of the gravity-feed water supply dam.

KUCHING: DAP Serian branch chairman Edward Andrew Luak has offered himself to be the party’s election candidate in Bukit Semuja.

He said DAP is very much well prepared to win the newly-created Bukit Semuja state seat in the coming state election.

“Since the creation of N23 Bukit Semuja state seat which was mainly sliced out of the former N19 Kedup state seat, the party has focused its attention on N22 Kedup and N23 Bukit Semuja seats to gear itself for the coming 11th Sarawak state election.

“Yes, indeed DAP is the party to take on Barisan Nasional in N23 Bukit Semuja. The party has left the other two Bidayuh majority seats of Tarat and Tebedu to PKR, its partner in Pakatan Harapan,” he said yesterday.

His statement came few days after PKR Serian deputy chief and hopeful Bukit Semuja candidate Reginald Abel was quoted in a news report claiming that PKR was all set to contest the seat for Pakatan Harapan.

Edward pointed out DAP made its presence felt in Serian just after the 2011 state election by setting up its service centre in Serian town.

Since then, DAP Serian has unceasingly served the people by attending to their problems, highlighting issues and organising events in Serian and in the villages.

Less than two years after the establishment of its service centre, he said DAP Serian took the challenge to contest the Serian parliamentary seat in the 2013 general election, which saw Edward taking on the incumbent and eventual winner Datuk Seri Richard Riot.

Though relatively a new venture for the party, Edward said DAP Serian did relatively well in the election, garnering more than 6,000 votes which he claimed was the highest votes ever obtained by any candidate taking on the incumbent, now a six-term parliamentarian and a federal minister.

“Almost daily, small groups of people come to the office to discuss and have dialogue with us at the service centre, discussing current issues affecting the people,” he said.

During the recent floods which hit many villages in Serian, he said DAP Serian was one of the first to spring to action, providing immediate relief in terms of food and drinks to victims gathered in evacuation centres.

He also said he and his team had entered almost all the villages in the two state constituencies of Kedup and Bukit Semuja, meeting the people and having ‘berandau’ and ‘kilakar’ dialogue sessions with the people.

On his past working experiences, Edward said he has served in the Sarawak administrative service as Sarawak Administrative Officer (SAO), district officer and divisional development officer, a position now called deputy resident.

He said he took optional retirement when attaining the age of 40 and joined Shell Malaysia, a multi-national oil and gas company. He retired as a company adviser and desired to continue serving the people and the country through politics.

While in the public and private sectors, Edward was very active in serving the community at large through his involvement in various non-governmental organisations.

Edward said he once served as a vice president of Dayak Bidayuh National Association (DBNA) and was chairman of DBNA Bintulu and Miri branches, and is now a life member of the Government Pensioners Association.