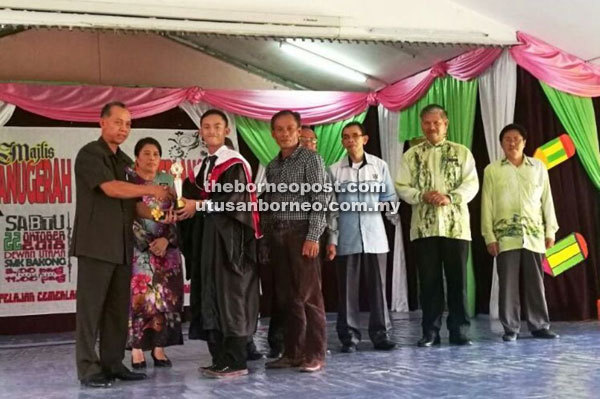 Penguang (left) presents a scroll to the best student as others look on.

MARUDI: Education and sports are vital in ensuring that a person grows into a successful individual, said Assistant Minister for Local Government Datu Dr Penguang Manggil.

Citing examples, he said those who excel in academics and sports are usually successful people in life.

Speaking at the ceremony to present excellence awards to students at SMK Bakong in Beluru near here recently, the Marudi assemblyman further said those who succeed are also well-behaved and respect their parents and teachers.

He told the rural students to do study hard and do their best in their exams so that they could go on to higher education and thereafter earn high salaries to improve the living standard of their families.

“I have to thank this school as I was a student here before I furthered my studies at Kolej Tun Datu Tuanku Haji Bujang in Tanjong Lobang in Miri,” he said.

At the same time, he reminded the students not to get involved in negative activities such as drug and alcohol abuse.

He advised them to master the English language as it is an internal lingua franca and frequently used in the modern era.

To those who would further their studies, he cautioned them to choose a suitable course to ensure their employability after graduating.

“Don’t blame poverty as the reason for not doing well in academics,” he advised.