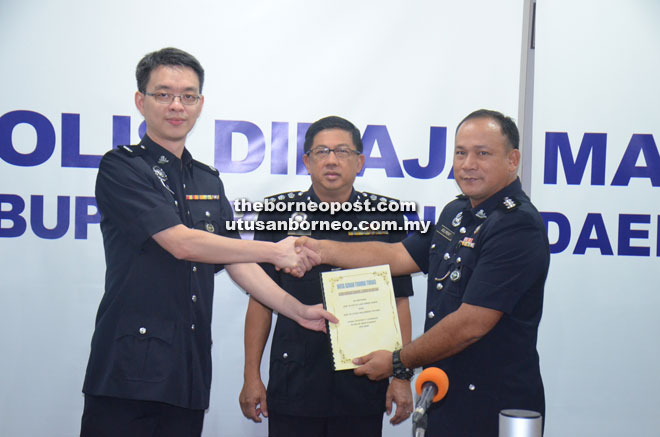 Soliment (right) hands over duties to Lee, witnessed by Lim.

In his speech, Lim said he was confident that Lee would be able to carry out his duties as the new Miri CID chief well as he had extensive experience while working in Bukit Aman.

Lee holds a Master’s Degree in Crime Science from University College London, UK. Lee, 38, comes from Batu Pahat, Johor and has been with the police force for 12 years.

“I started as an ASP cadet in 2005. I have also worked as CID senior investigation officer at IPD Kuala Muda in Sungai Petani, Kedah from 2006 to 2008. In 2008, I started to work at Bukit Aman’s traffic branch as a staff officer. Then, from 2011 to 2012, I was staff officer at Corporate Communications Division, IGP’s Secretariat, Bukit Aman,” said Lee. Lee continued to further his studies in Master of Science degree in Crime Science at University College London (UCL), UK and graduated with distinction in 2013.