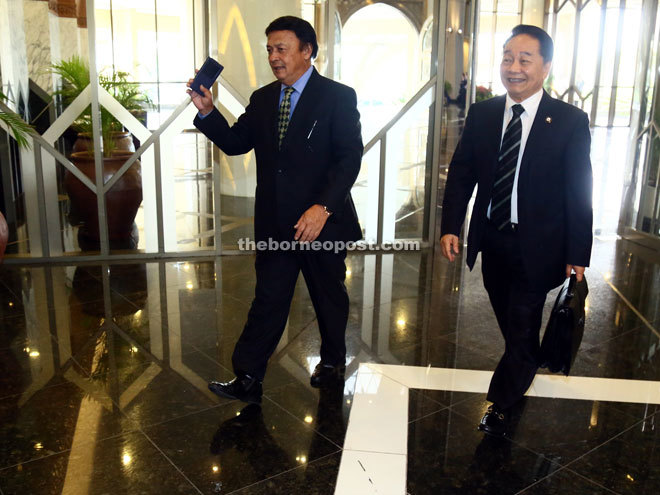 Wong (right) and Minister of Social Development Tan Sri William Mawan are seen arriving at the DUN building for the morning session yesterday.

THE state recorded 1,783 dengue cases as of November this year, a decrease of 6.9 per cent from 1,916 cases in the same period last year.

Local Government and Community Development Minister Dato Sri Wong Soon Koh, in his ministerial winding-up speech at the State Legislative Assembly yesterday, said the average number of weekly reported cases this year is 38, slightly above the usual baseline for the disease in Sarawak.

“In order to curb the disease, a total of 116,495 premises were inspected. A total of 312 compounds valued at RM140,000 and 231 warning notices were issued to house owners found to have positive breeding grounds for Aedes mosquitoes. A total of 194,448 premises have been fogged,” Wong (BN-Bawang Assan) said in his speech.

He explained that the device works by emitting an odourless stream of carbon dioxide, warmth and moisture to the air to attract mosquitoes to equipment, where a powerful suction system will vacuum and trap the mosquitoes into a net. He said if the project proved to be successful in trapping and killing mosquitoes, the ministry would consider introducing the device to all local authorities in the state.

Touching on malaria, Wong said the state recorded a total of 761 cases up to November this year, a decrease of 34.9 per cent or 408 cases from 1,169 in the same period last year.

“A specific plan to prevent local transmission of malaria had been worked out since 2011 in line with the national plan to eliminate the disease by 2020. The plan had successfully reduced the incidence of malaria in most parts of Sarawak. The activities carried out include mass blood surveys to detect cases especially among the local mobile population group and among foreign workers in plantation schemes,” he continued.

Wong also said there was a marked increase in cases of Hand, Foot and Mouth Disease (HFMD) with 8,721 cases reported, which he explained was expected following the natural three-year peak cycle of HFMD.

He also said 394 cases were admitted to the hospitals with only one severe case reported at Miri Hospital due to the patient suffering from dehydration.

“There is no death reported to date for this year. To curb the disease, the state Health Department had strengthened and carried out public health control measures including daily HFMD case surveillance at clinics and hospitals, early diagnosis through laboratory support, strengthening laboratory surveillance system, public announcement, ‘gate keeping’ (screening) at pre-schools and kindergartens, as well as health promotion activities on hygiene and hand washing,” he said.

In regards to tuberculosis (TB), the state recorded 159 deaths in the first 10 months of this year out of 2,056 cases. Last year, 2,261 cases were recorded in the same period.