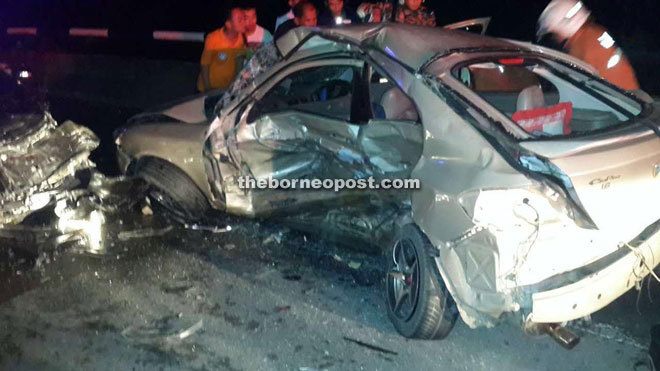 Firemen helping to extricate the victims out of the wreckage.

MIRI: A crash near Kampung Beraya, Bakam, along the Miri coastal road on Saturday night claimed the life of a 52-year-old man.

According to police investigation, the car that the man was driving skidded off the road before it rammed into another vehicle coming from the opposite lane.

The deceased was identified as David Sim of Bekenu.

He was pronounced dead at the scene due to serious injuries on his body and head sustained during the impact.

It is said that David Sim was heading towards Bekenu from Miri when the accident happened.

Both vehicles were badly damaged.

However, the driver and passenger of the other car survived, although they sustained injuries.

Both were rushed to Miri Hospital after the 9.45pm accident.

A fire engine with seven firemen were immediately dispatched to the scene after receiving a call on the crash, to help extricate the injured victims who were pinned to their seats.

Investigation on the incident is underway.