Dreams of local talents realised — thanks to Gading Kenyalang 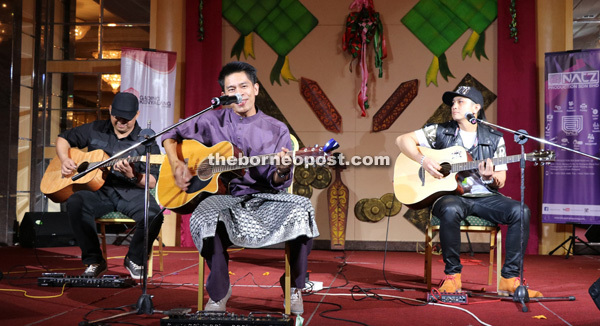 MIRI: Locally owned but Kuala Lumpur-based company, Gading Kenyalang Sdn Bhd, which was set up in 2013 is fast becoming popular locally and internationally for its contributions to the growth of local arts and entertainment scene.

Within a span of three years the company is on track accomplishing its mission to enhance, encourage and develop the growth of local entertainment industry through active involvement in producing documentaries, music, films and event management.

Among the upcoming projects in September will be the launching of ‘Album Sound of MCI’ – making dreams come through for 11 local young talents who were scouted through singing competitions – Miri City Idol – held in May 2015 and 2016.

The 11 MCI artistes except for Alisya had the first public preview of their joint album during the open house held at one of leading hotels here.

All their songs were composed by Malaysian renowned composer Julfekar Ahmad Shah, who also performed during the open house and having a duet with guest artist, Min Yassim, who is becoming very popular overseas after winning the Outstanding Asian Singer 2015 at the Sulo Gawad Award 2015 in Manila.

“Performance like this is one of ways to expose and groom new talents.

Several of the talents interviewed thanked the company for making their dreams come true.

“It is too expensive to produce album. Since singing and winning strings of competition15 years ago, my dream to become a recording artiste through Nats Production is now a reality,” said Dayang Bismi.

Nicole, a student with special needs was overwhelmed with the idea of becoming a recording artiste, although she never once dreamt of becoming one.

Criteria in the selection of artistes

Noraini said NATS Production prioritised talents who were committed, having enthusiasm, hardworking, discipline and having self-confidence.

“Even though you have the talents but without discipline, enthusiasm and all these combinations you will be nothing.

“From MCI alone there are a few others inline but for a start 11 were selected,” Noraini said, adding that before compiling album and prior to the MCI 2016 final, boot camps were held for the participants. It coached them on vocal, grooming, communication skills, stage presentation and how to overcome mistakes on stage.

“We actually plan to have it throughout Borneo with Miri as the starting point, then Kuching City Idol and Borneo Idol.

“Currently, we are in the process of producing a new wave of music of local dialects/ethnicity and that is why we are calling corporate bodies to tag along with us to do this as part of their community services,” she said.

She added albums produced would be both physical and online sales such as through YouTube so that people could download them.

On the cost of producing music/album Noraini said it could be a low as RM500 and might exceed one’s expectation, depending on quality and medium used in production.

“For example, composition fee for an established composer may cost around RM7,000 (the lowest price call and it varies individually). Mixing and mastering a song differ in pricing as well. The standard price may not be in context but the most common and acceptable price is very subjective,” she said.

Guest artistes, MCI talents with Noraini, in a photocall with her organising committee members for the company’s recent Raya open house.

Other heritage projects promoted by the company

“Our products are a combination of everything – music. fashion, arts and events. We are highlighting heritage, culture and the best way is through entertainment, fashion and events.

“We focus on edutainment – educate people through entertainment, bringing into the music industry to blend the traditional, classical Borneo music into the mainstream and the talent as well,” Noraini said.

Similarly, through the fashion line, more on pua kumbu design and beads of the Orang Ulus where outfits including shoes are made with a bit from pua kumbu.

“We educate people through fashion like promoting the materials such as pua kumbu which is wearable and not just used as tablecloth or decorative items. In this way we promote our country and its heritage including the scared aspect of using pua kumbu,” said Noriani.

On achievement, Noraini said so far their fashion products were well-received in several countries that they had organised fashion shows apart from Malaysia.

They have been to Berlin (Germany), Korea, Taiwan, twice in Manila (Philippines) and Bali, Indonesia and did few shows in Melbourne (Australia) whereby last year they launched their latest product ‘Muzik Kita’ where a local Iban played sape.

“So far, the world market is very good but we still need good support from our local people and the respective ministries because it is hard to promote it alone.

“So far the company has done it all alone,” she said, adding that she was tired of knocking at the doors of someone when they promised help that never came.

In addition, the company provides facilities for students’ industrial training or attachment in fashion, management, music engineering and filming.

“For the past years we catered for students from public and private higher learning institutions in Malaysia, Pakistan, Brunei, Maldives and Indonesia,” she said.

Despite all the challenges, Noraini who is a lawyer by training and had held high posts in numerous ministries in Malaysia since 2004 like assistant director to the Minister of Housing and Local Government, special function officer to the Minister of Transport, besides pupilage/chambering/legal assistant with Messrs Surya Kumar and Co in 2001.

Noraini, who hails from Miri and had her early education at SMK Lutong, is currently assisted by eight permanent and 15 part time staff in Malaysia in addition to contract staff overseas – three in Indonesia, two each in Australia and the Philippines and one each in Taiwan, Egypt, South Korea and Hong Kong.