‘DPP Hub to expedite MyKad processing in the state — Fatimah 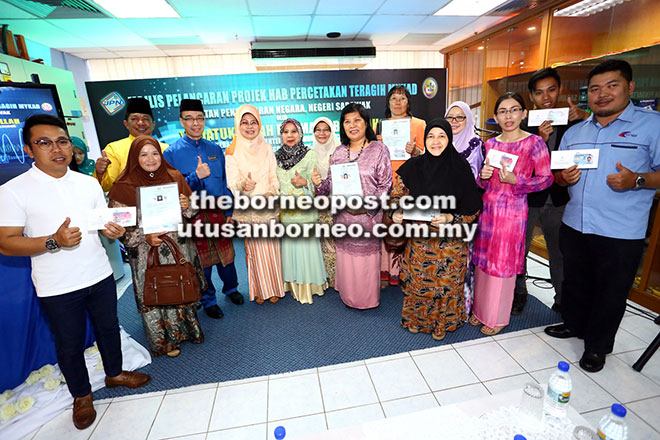 Fatimah (fifth left) seen with NRD officials and others during the ceremony held at the office itself yesterday.

KUCHING: The production process of MyKad in Sarawak will now be faster following the launch of the MyKad Distributed Printing Project (DPP) Hub here yesterday.

Officiating and speaking at a ceremony to launch the project, Minister of Welfare, Community Well Being, Women, Family and Childhood Development Datuk Fatimah Abdullah commented that she was glad the project has finally been launched in the state.

She was also happy to note that the central region of Sarawak has the most hubs as it is there where the hubs were needed the most.

“The implementation of the DPP Hub Project is very beneficial to the people and the civil service. This is because the benefits of saving time can facilitate other official affairs that require the authentication of information through MyKad, and the people can get the facilities and services offered faster and faster,” she said.

For Sarawak, there will be six DPP hubs (and 41 sub-hubs) located across the state.

NRD (Operations) deputy director-general Datuk Mohd Zahari Hassan, who was also present at the ceremony, commented that with DPP, the production of MyKad is expedited by up to 50-70 per cent.

Fifty-five NRD offices throughout the country have been supplied with printers to print an application for identification cards received at the office itself.

“This DPP Hub Project is also in line with the principles under the National Blue Ocean Strategy (NBOS), where this project was made through strategic collaboration between NRD, Pos Malaysia Berhad and suppliers companies.

“The purpose of this project is to expedite MyKad’s ongoing production, in a short period of time with low expenditure and have the biggest impact in NRD transactions and customers,” said Mohd Zahari.

Apart from that, he also mentioned that NRD will soon install MyKid processing machines at all Urban Transformation Centres (UTC) which will enable MyKid to be processed within 24 hours.

Sarawak is the last state in the country where NRD implemented the DPP project.

“Sarawak was chosen last because the state has the most number of DPP offices located in the country. We also decided to organise this ceremony in Sarawak as somewhat of a closing ceremony for the implementation of this project,” commented Mohd Zahari.