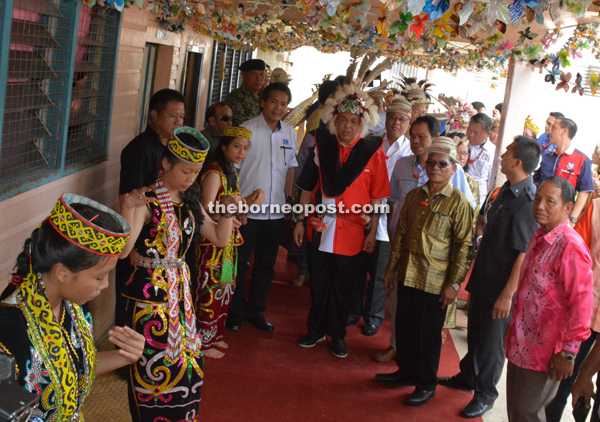 The longhouse folk welcome Ahmad Zahid (second left), flanked by Dennis (left) and Anyi and Usung to the longhouse.

MIRI: The Barisan Nasional (BN) government under the leadership of Prime Minister Datuk Seri Najib Razak has indeed walked the talk and is fair in the distribution of allocations to the people, including those in the rural areas.

Baram MP Anyi Ngau said Deputy Prime Minister Datuk Seri Zahid Hamidi’s visit to Long Bemang last Friday was proof of the BN top leaders’ willingness to go into the rural areas, in particularly Baram, to be with the people and to tell them that they were not forgotten.

“On behalf of the people of Baram, I would like to thank Ahmad Zahid and his entourage for making an effort to visit us in Baram. The RM2.5 million allocation for Long Bemang that Ahmad Zahid announced on Friday is proof that the government is fair in allocation distribution. Part of the allocation (RM1.5 million) is meant to build and extend the BEM Church in Long Bemang.”

Baram, he said, still needed a lot of development including electricity and water supplies and tar-sealed roads to the over 400 longhouses and settlements in the constituency.

Sharing the same hope with Anyi was Telang Usan assemblyman Dennis Ngau, who hoped for more allocation for the Baram from the federal government.

“We still need about RM20mil to supply spandex roofing material to more longhouses in Baram. There are still many longhouses which are in need of the material,” he said.

Dennis also suggested that the current logging road from Long Lama to several longhouses in Tutoh Apoh area be upgraded to gravel road which would need at least RM30 million.

Headman of Long Bemang, Usung Deng, 53, also expressed his gratitude to the state and federal governments for choosing Long Bemang as one of itineraries of the deputy prime minister’s visit to the state.

He said the longhouse had received many of the state’s

top leaders including the then- chief minister Head of State Tun Pehin Sri Abdul Taib Mahmud, but it was the first time for the deputy prime minister.

“Long Bemang is the longest Kayan longhouse in the country with 238 doors and 3,800 residents. Sixty others are still in the process of being built, which will be completed next year.