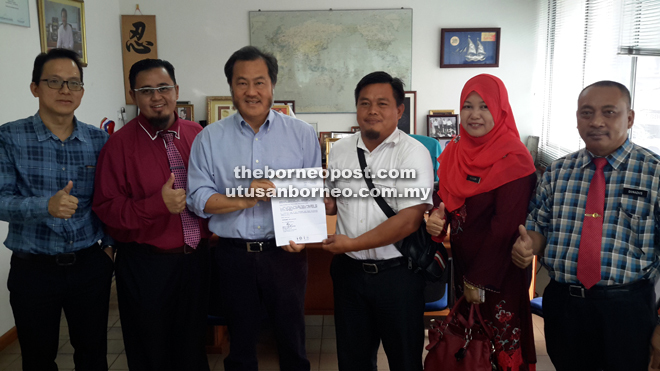 Hii (third left) handing over the approval letter to Indra, witnessed by the school teachers.

He said the two schools will get RM500,000 each. The grants were requested by the schools’ parent-teacher association (PTA) and board of directors during the campaigning period.

“I’m pleased to have received the grants on behalf of Datuk Seri Zahid and thank the Federal Government for the concern towards the schools in Pujut constituency,” Hii told members of the press after handing over letters of approval from the Federal Government to the schools. Present were SK Pujut PTA chairman Indra Hussin and SM Pei Min Miri board of directors chairman Khor Oii Long. He reminded the schools to use the grants wisely to ensure their buildings or facilities are in good condition.

Meanwhile, Khor thanked Hii for his relentless efforts in helping SM Pei Min Miri and for pursuing the grant.

He said Hii should be an example for other leaders to follow as he regularly contributes to society and schools.

“We thank Hii for his undivided support to SM Pei Min Miri and wish him good luck in his future undertakings,” he said.

Sharing the view, Indra said Hii had fulfilled his promises during the election to SK Pujut and thanked him for his support and contributions to the schools, non-governmental organisations and associations in Miri.

He described Hii as a man of his words who fulfils his promises to the people of Pujut.