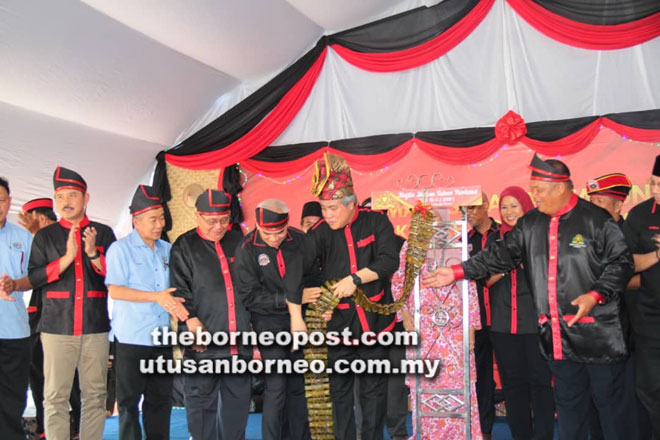 LAWAS: The pursuit of technology and knowledge-driven progress must be matched by efforts to preserve the unique roots and identity of the respective communities in Sarawak.

He reminded that it is the younger generation that will carry on the identity and uniqueness of their community’s traditions, culture and language and that is why it is vital that these are passed on to them.

“If they lose it, they lose their own identity in the face of technology, innovation or new knowledge which would be tragic as we must know where we came from,” he said.

Awang Tengah said communities should discard old mindset or adage which held them back from progressing.

On a related matter, he informed that the Sarawak government had approved the establishment of a Kedayan culture and research centre in Bekenu in support of cultural heritage preservation in the state and will consider the proposal for a museum in Lawas.

The deputy chief minister also called on Sarawakians to be united to determine their own destiny under the Gabungan Parti Sarawak (GPS) coalition which upholds the struggle for autonomous powers and rights of the state as stipulated in the Malaysia Agreement 1963 (MA63).

He said Chief Minister Datuk Patinggi Abang Johari Tun Openg had rolled out the state’s biggest development budget for 2019 of over RM11 billion to spur more development, especially in the rural areas, out which RM1.5 billion is for the Northern Region Development Agency (NRDA) covering Limbang and Lawas.

In addition, he said the state government had also taken up the responsibility to continue all federal-funded projects which were slashed or put on hold.

“The hopes of Sarawakians were dashed when the funds were either drastically reduced or projects were slashed by the Pakatan Harapan government,” he said, naming some of the projects as house rehabilitation, rice fertiliser subsidy, roads, bridges, treated water, power supply and other amenities. We have to look after ourselves because we want to determine our own destiny,” he said.

Earlier, Lawas Kedayan Association chairman Harris Majid called on the state government to allocate a piece of land for the setting up of a Kedayan cultural centre which could accommodate major events such as the annual district-level Makan Tahun celebration.

He also called for a bigger community hall for Ulu Merapok to cater for the increased population which also includes the Lun Bawang, Tagal and Iban communities.

Haris said the association had been engaging about 500 Kedayan youths to learn the forgotten words of their language and efforts were also made to acquaint them with the traditional skills in house building using natural resources.