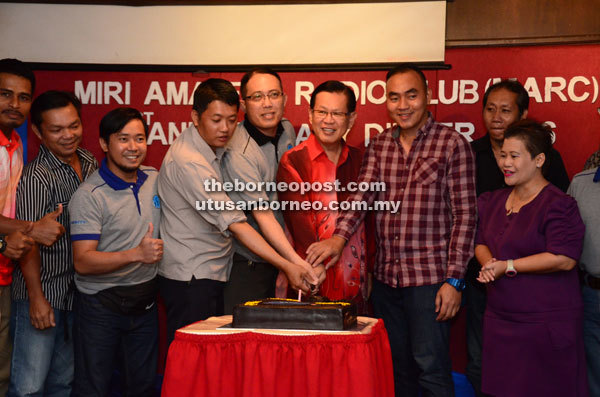 Marking the first anniversary of the Miri Amateur Radio Club are (from fourth left) Lo, Shaheedan, Lee, Hazelan and Veronica, with others alongside.

MIRI: Amateur radio still rules the airwaves with its wide user coverage despite the hi-tech gadgets like smart phones which is the rage among the young, chic generation.

Young people especially should not totally abandon amateur radio as it is one of the Information Communication Technology (ICT) facilities.

“In the event of an emergency like disasters in areas without signals for the cellular communication system and satellite telephones, amateur radio is still the indisputable choice.

“This is proof of how much the service is (still) useful and needed, much so in places where there is no telephone or mobile phone coverage,” Assistant Minister for Tourism Datuk Lee Kim Shin asserted.

Lee said this during the first anniversary celebration of Miri Amateur Radio Club (MARC) at a leading hotel here on Saturday.

He was aware that amateur radio seemed to be a “dying interest” among the younger generation, as the world marches on with more technological gadgets like advanced smart phones.

In reality, Gen Y should recognise the useful role of radio as they can communicate with relatives or authorities on the other side during an emergency or during activities like sports, travelling and camping, he said.

In this respect, the Senadin assemblyman encouraged youths and others to join MARC to learn more about its functions, roles and importance of amateur radio.

Currently, there were 60 registered members comprising amateur radio operators from Miri and Baram area who are licenced by the Malaysian Communication and Multimedia Commission (MCMC), he disclosed.

Lee pledged his support for MARC and its activities for the members.

Earlier on, MARC president Vincent Lo in his welcoming address said they would support whatever community programmes and activities held locally.

“As a voluntary organisation, we strive to contribute our part to society by supporting any community programme and activities.”

Also present at the gathering were MARC vice-president Hazelan Abdullah, Shaheedan Abdul Wahab who is advisor and secretary Veronica Nohan.