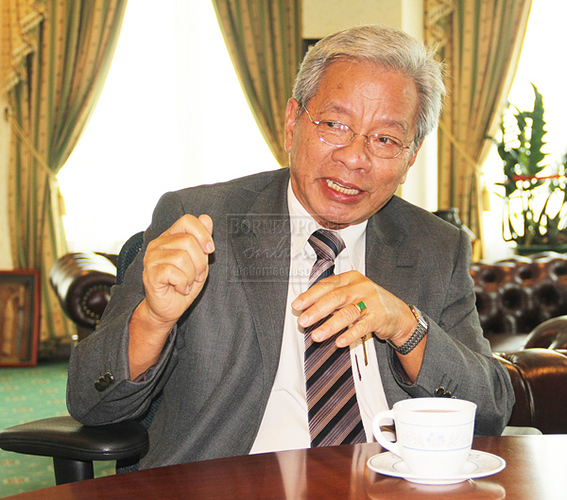 We have to deliver what we promised. More than that, we have to have a proper proposal for them (the rural voters). -Tan Sri Datuk Amar Dr James Masing, PRS president

MIRI: Ten party divisions in the northern region and one in the central region are worried of a possible split in the party due to the looming tussle for the deputy president’s post in the impending PRS Triennial Delegates Congress.

The divisions said the so-called friendly contest would likely cause a split in the party and therefore wished to play a consultation role to avoid that from happening.

“It is their wish that the deputy president’s post is not contested in order to preserve party unity,” said their spokesman Pandang Semat who is chairman of PRS Lambir branch, yesterday.

He said the 10+1 group had decided to lead consultations among party leaders and division chairmen in trying to avert a contest for the deputy president’s post in the interest of party unity and solidarity.

Pandang said he was willing to initiate the proposed consultation but did not say what steps that would be taken in the best interest of the party which has 11 assemblymen and six MPs.

The party’s secretary-general and election committee chairman Datuk Wilfred Nissom on Wednesday announced that several key posts in PRS would be uncontested during the TDC in Bintulu on Oct 21-23.

The uncontested posts are president, youth and women chiefs, and deputy and vice women chief.

The posts of deputy president, deputy youth chief, seats in the supreme council, youth and women wings would be contested.

The youth and women chiefs automatically become vice presidents by virtue of their positions.

Snowdan Lawan would be the new youth chief, replacing Liwan Lagang who has exceeded the age limit of 40 years, Datuk Doris Brodie is the women chief and her deputy is Rosalyn Neging.

This is based on the returns received from the party’s 38 branches and was finalised during the election committee meeting on Tuesday.

The party’s president is Tan Sri Datuk Amar Dr James Masing, who is also deputy chief minister, but all eyes would be on the contest for the deputy president post which is currently held by Datuk Joseph Entulu.

Entulu will square off with Datuk Joseph Salang, a former deputy federal minister, and this would have serious implication on this Dayak-based party formed after the demise of PBDS, a breakaway party from SNAP due to leadership tussle.

Both SNAP and PBDS have since disappeared into political oblivion after they were deregistered by the Registrar of Societies (RoS).

PBDS was formed in 1983 by a group of disgruntled Dayak leaders led by Datuk Amar (now Tan Sri) Leo Moggie after breaking away from Sarawak National Party (SNAP) following his loss in the contest for the (SNAP) president post against Datuk Amar James Wong Kim Ming.

The party was dissolved twice, in 2003 and 2004, due to leadership crisis between Dato Sri Daniel Tajem as PBDS president and Masing the challenger.

The dissolution of PBDS led to the formation of two offshoot parties; PRS led by Masing and Datuk Sng Chee Hua and Malaysia Dayak Congress which failed to be registered and was later replaced by PBDS Baru.