New Jersey surgeons removed a rapidly growing, 51-pound (23-kg) cancerous tumour from a woman who had delayed treatment for more than a month until she became eligible for health insurance, her doctor said on Tuesday.

She was a skinny lady with a huge belly. I mean it looked like she was literally pregnant with triplets, said Dr. David Dupree, who led the surgery on the 65-year-old woman, at Riverview Medical Center in Red Bank, New Jersey.

She was just all belly, he said in describing his first meeting with the patient, a homemaker from nearby Union Beach, New Jersey, who asked to be identified only as Evelyn, her first name.

About six to eight weeks before she showed up at the hospital, Evelyn noticed discomfort in her abdomen and that her normally 120-pound frame was rapidly ballooning. Dupree said she sought medical help on June 4, just days after her 65th birthday, when she would qualify for Medicare, the U.S. healthcare programme for seniors.

The woman was rushed into surgery on June 10 after a CAT scan revealed the life-threatening tumor inside of her stomach. “I didn’t want to scare everybody, like my husband and my sons. I kind of kept a low profile on it,” said Evelyn.

The reason she didnt go earlier was because she had no insurance, Dr. Dupree added.

By the time she performed her surgery, Evelyn weighed more than 170 pounds, her legs were swollen with trapped blood, she was badly dehydrated, and, scans showed, the tumour - a malignant sarcoma - was crushing her inferior vena cava, one of the main veins returning blood to the heart, and putting her life in danger.

With her body too weakened to be operated on immediately, Dupree scheduled surgery for the following Monday, allowing time for her to become rehydrated and for her blood pressure to be brought under control. But after she became short of breath on Sunday evening, Dupree brought the surgery forward.

“I knew that she wasn’t going to make it through the night,” he said. “Either she goes now or she dies tonight,” he recalled thinking. 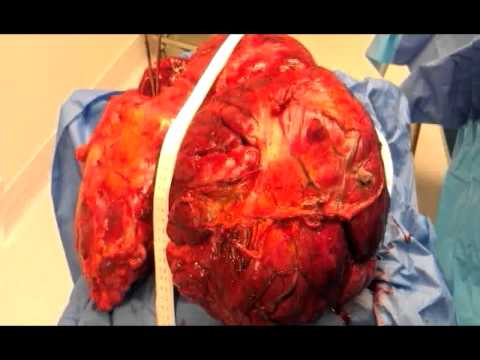 Opening her up, Dupree and his team found the tumour, which appeared to have originated out of the fatty tissue around her large intestine, had engulfed many of her internal organs, and had to be sliced away “millimeter by millimeter”. The doctors took about five hours to remove the mass in one piece from the woman. They also had to remove organs engulfed by the tumor, including segments of intestines.

Evelyn was still recovering from the operation in a rehabilitation centre on Tuesday, Dupree said. She declined to be interviewed.

Although the immediate threat to her life has passed, she must still see an oncologist about treatment for her cancer, which may not have been completely eradicated by the surgery, and may require chemotherapy or radiation therapy.

Dupree said he would advise uninsured patients to see a doctor immediately if they knew they were unwell no matter how near their 65th birthday might be. He said the hospital would have operated on Evelyn regardless of her insurance status, but added he did not know whether doing so would have cost her more money.

In Vietnam, a nearly 200-pound tumor was reported in January to have been removed from a patient. And Mexican doctors this week removed a 33-pound tumor from a 2-year-old.