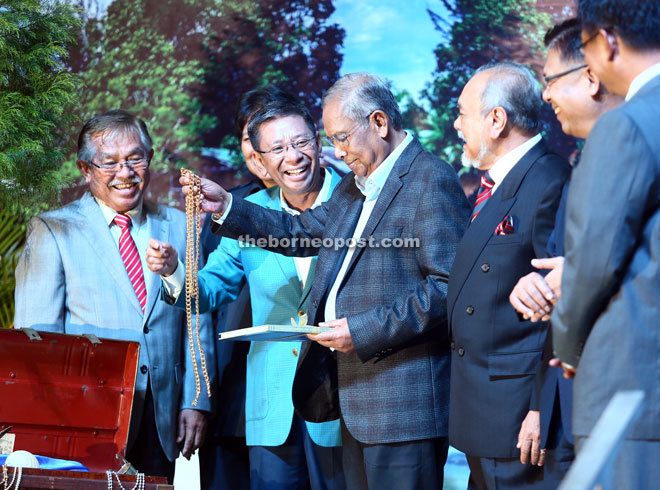 Adenan unveils the book from a chest as Azmi on Adenan’s right and other VIP guests react. — Photo by Muhammad Rais Sanusi

KUCHING: District officers are encouraged to document the history and origin of the areas they serve to act as references for future generations.

Chief Minister Datuk Patinggi Tan Sri Adenan Satem said it is important for district officers to write about the history of villages and places in their areas, including economic growth and activities of the local community, to preserve them as well as to create better understanding on the changes and impact of past events on current society.

Officiating at the launch of a book entitled ‘The story behind the villages in Lundu District’ written by former Lundu district officer Azmi Bujang, he acknowledged the pain and great length of time it takes to be familiar with the locality and its communities.

“This is our tradition and there is a history behind all these names. There are relations between history and name of a place. It is very important that our district officers write about their locality so that everybody would know its history,” he said in his speech at the event held at The Waterfront Hotel here yesterday.

Witnessing the launch were State Legislative Assembly speaker Datuk Amar Mohd Asfia Awang Nassar and author of the book, Azmi, who is a private secretary to the chief minister.

Adenan cited how Sarawak had come into existence long before Rajah James Brooke landed here, saying somehow many had mistaken that the state’s history only started after the Brooke era in 1839.

The chief minister also mentioned about Kuching, which he believed could be the only city in the world named after an animal. Whether its name was derived from a fruit called ‘mata kucing’ or from the Malay word for cat (kucing), Adenan described the city as unique and has a distinct history that should be further documented.

Adenan, who is also Tanjung Datu assemblyman, described Lundu and its sub-district of Sematan as a beautiful place with beautiful beaches, islands and mountains that make it an attractive tourism area.

The 174-page book features the history and origin of some 100 villages in Lundu, including areas in its sub-district of Sematan. Azmi, who served as the 44th Lundu district officer from 2008 to 2013, said it was his love for local history, literature and photography that had inspired him to write the book.

He said he gathered information and data for years before he started writing the book in 2011.

What was supposed to be a one-year project ended up taking several years to complete as Azmi assumed his new role in the Chief Minister’s Office after Adenan was appointed chief minister in 2014. Most of the photos in the book were taken by the author who is also an avid photographer.