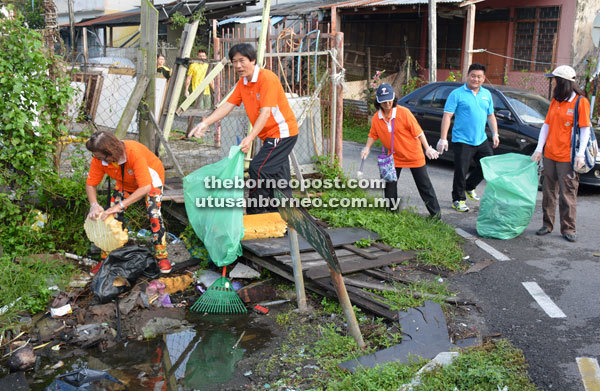 Members of a NGO clean a lane at Tiong Hua Road which falls under Zone 7. — File photo

SIBU: The Health Department has collected compounds totalling RM76,500 as at Nov 7 in effort to curtail the number of dengue cases in the state which has recorded 2,426 cases.

In a statement received from state health director Dr Jamilah Hashim on Monday, she said 86,259 premises in the state were inspected for potential Aedes mosquito breeding grounds from Jan 1 to Nov 7.

“The total number of compound (notices) issued during the period was 365 while RM76,500 in compounds were collected.

Dr Jamilah added that Sibu District reported 1,343 cases in the same period, or 55 per cent of the total number of reported cases in Sarawak.

She also said seven deaths due to dengue were reported in the state as of Nov 7. Five cases happened in Sibu and one each in Song and Meradong.

On Zika, Dr Jamilah said instruction on ‘Operasi Mega perangi Aedes’ had been issued to all districts, and was carried out from Sept 23 till Oct 23 on all abandoned housing projects, empty land and lots and construction sites to ensure all Aedes breeding places were destroyed to prevent the spread of dengue and zika.

She also said there was an instruction to carry out mass ‘gotong-royong’ nationwide on Nov 22, while instruction on mass integrated gotong-royong at the national-level was to commence on Nov 20.

Buntings on dengue and Zika preventions have been put up at all public places such as airports, bus and express terminals, since May.

Meanwhile, the people here (Sibu) have waged an all-out war against Aedes mosquitoes through a massive cleaning campaign participated by over 1,000 people last month.

They went on a search-and-destroy of mosquito breeding grounds in Zone 7.

Thirty groups comprising 1,018 people from various government departments and agencies, non-governmental organisations (NGOs), institutions of higher learning, IM4U and others were assigned to clean up various locations in Zone 7 – a dengue-prone area.

The cleaning campaign organised by Sibu Municipal Council (SMC) was meant to make residents in that zone aware of the need to maintain a high standard of cleanliness of their surroundings.