Delivery man makes the headlines for a change 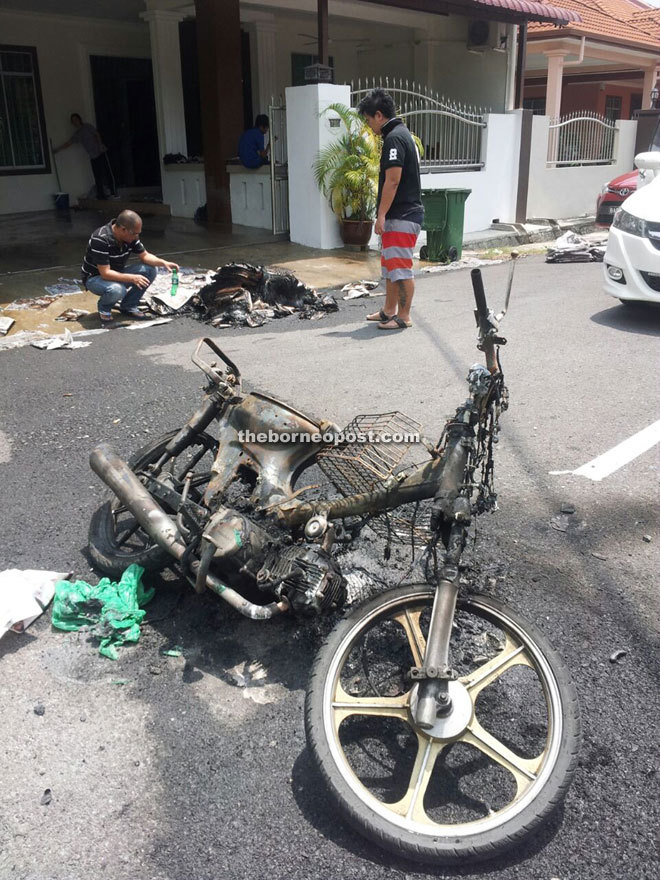 The house owner (left) examining the scene of a burnt-out bike and pile of newspapers where the delivery man beat a hasty retreat to hospital.

MIRI: The hot news took on a deadly twist for a delivery man when his motorcycle went up in flames during his dawn newspaper round yesterday.

The mishap reportedly happened around 5am when the 45 year-old man was on his round within a residential area in Jalan Cahaya.

It was learnt that while delivering newspapers there, his motorcycle ignited and the pile of papers caught fire, before the machine exploded.

Fortunately, he escaped serious injuries but was later treated at Miri hospital for smoke

inhalation after he called up his supervisor who sent him for treatment.

His charred motorcycle as well as the pile of half-burnt newspapers meant for delivery yesterday (March 27) were abandoned when he beat a hasty retreat.

The incident occurred just a few steps from the house of a police officer.

According to the policeman, he and his family were just returning home from a three-day vacation when they bumped into a pile of charred newspapers and burnt motorcycle near the house gate .

“We were shocked by the incident and immediately called up a mobile police vehicle (MPV)… as at that point we thought foul play was involved,” said the house owner when met at the scene.

The family arrived at the house around 9am. However, further investigation dismissed any foul play in the fiery incident.