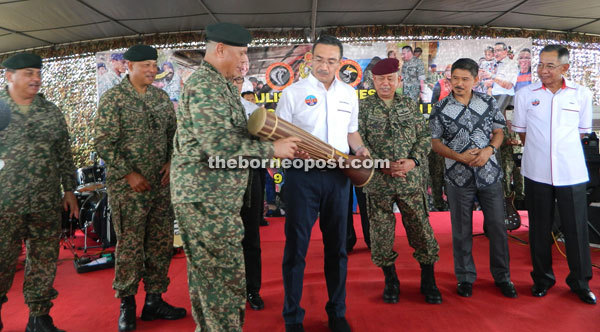 Maj Gen Stephen (left) presents a ‘gendang’ as souvenir to Hishammudin while Ripin, Zulkifeli and others look on.

MIRI: The Ministry of Defence has allocated some RM94 million for the implementation of Armed Forces Family Homes (RKAT) project for the 20th Battalion Royal Malay Regiment at Sri Miri Camp.

He said this at a gathering with personnel of 20th Battalion Royal Malay Regiment and Territorial Army at Sri Miri Camp, here yesterday.

Hishamuddin also gave the assurance that he himself would monitor the progress of the project until its completion.

In addition to that, Hishammuddin said the ministry had allocated RM65 million under the Army Care to upgrade facilities in the camp.

“I can assure all of you present at the gathering today that the armed forces is committed to improving the welfare and interest of every personnel living in this camp.”

At the same function, he welcomed home those who have completed their duties during Ops Balasah in Sabah and Ops Jagakawan in Limbang, Barrio and Ba Kelalan recently.

He also approved a RM300,000 allocation for the assembly hall of SK Riam Batu 2 and RM100,000 for the maintenance of mosque (Masjid Panglima Angkatan Tentera).