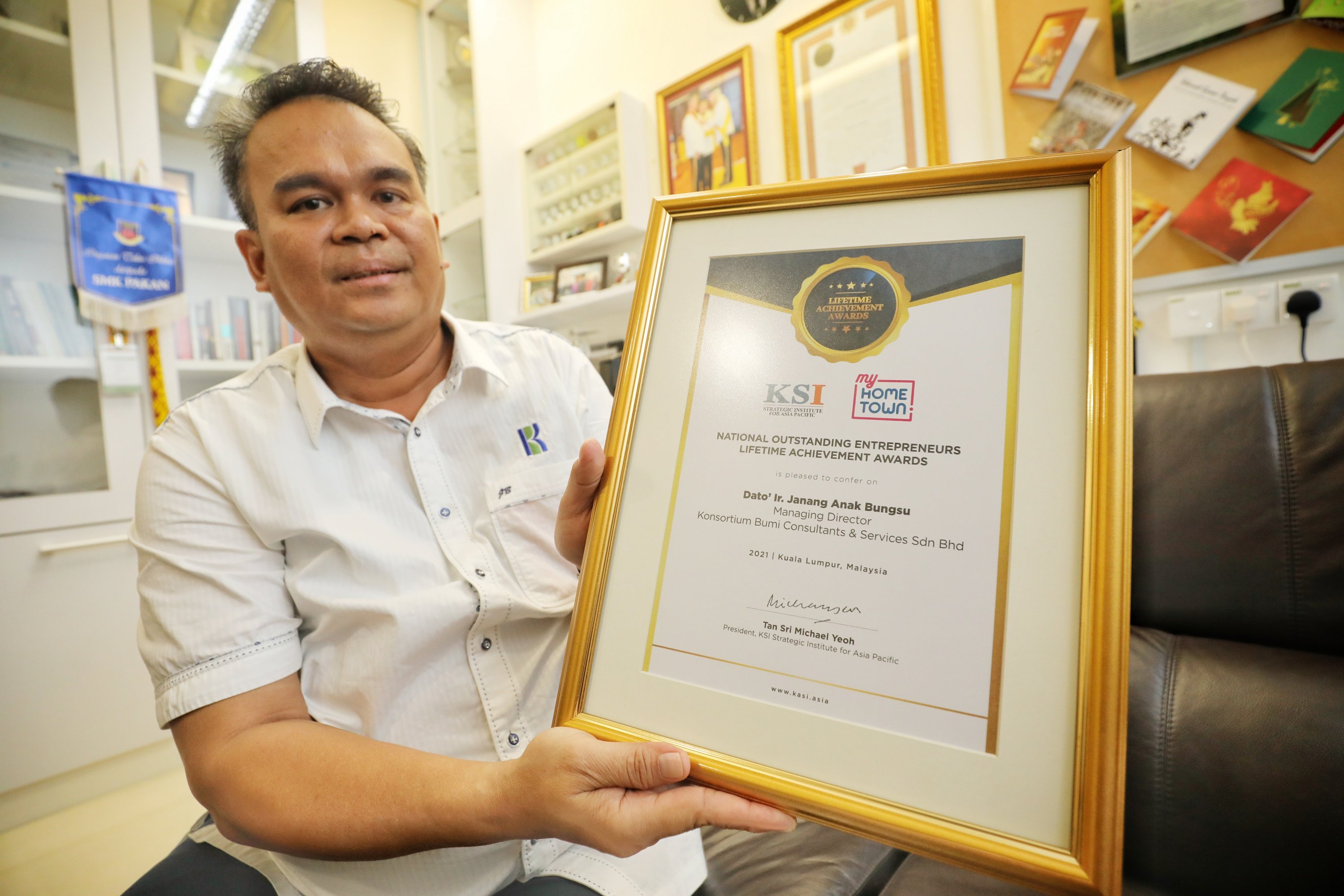 Janang showing the latest award certificate during the interview. – Photo by Chimon Upon

As recipient of the award, Janang is entitled to be listed and recorded in KSI’s Distinguished Entrepreneurs Gallery and also its newly launched website and app.

The award also means that Janang’s business and entrepreneurial achievements have been recognised as contributing to the growth and development of his hometown, Kuching.

In recognition for his dedication as a hard working and successful entrepreneur and business leader, Janang was presented with the award at a special conferment ceremony at the Berjaya Times Square Hotel in Kuala Lumpur on Dec 15 last year.

When met at his office here yesterday, Janang said he was proud and honoured to be recognised as a businessman at national level.

“The award also is proof that Sarawakians can be on par or at least, if not better than other businessmen in Malaysia.

“And to receive it on behalf of the Dayak business community is significant in terms of the development of the Dayak. It is not easy for any businessman to be in a competitive environment but thank God, we (KBCS) managed to be among the elites and be recognised as one of the top business companies in Malaysia,” he said.

He added that the award also meant that KBCS has been recognised for its practices apart from helping the company to see things in a broader perspective, to be more creative in terms of using advanced technology and inspire it to move to a greater height.

KBCS a mechanical and electrical consulting firm was set up in 2006 by Janang together with fellow professional engineer David Sengalang Uyang and professional architect David Keen Hollis Tini.

Janang said KBCS has ventured into the oil and gas industry after setting up a consulting engineering firm in Miri last year and serving clients like Shell, Nippon and soon, Petros once it is fully operational.

He also said that KBCS is registered with Petronas.

Meanwhile, Janang said his company subscribes to retaining staff and rewarding them with bonuses.

He said KBCS did not believe in imposing pay cuts even during the Covid-19 pandemic because the company subscribes to the principle that its staff would be with them even during the difficult times.

Apart from that, Janang said KBCS did not forget its social obligation and has enhanced it corporate social responsibility (CSR) by either by setting up or assisting non-governmental organisations (NGOs).

He also founded an NGO called Rural Mission Evangelical Ministry which has distributed food baskets worth of RM105,000 to families affected by the recent lockdown due to the Covid-19 pandemic in the state’s central region.

Janang’s most recent CSR effort was for the Julau District Community Development Association where he handed over a mock cheque of RM4,400 to the association’s representative Christopher Ijau Mudai at his office lobby yesterday.