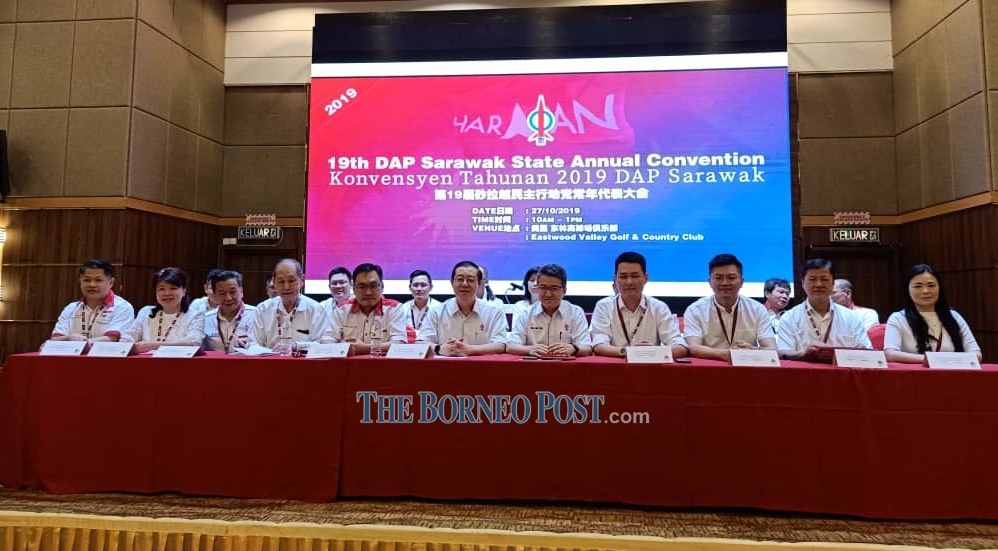 The DAP Sarawak leadership in a photo call with Lim (centre) during their annual convention in Miri today.

MIRI: DAP Sarawak has proposed to the Sarawak government to reform the state’s public transportation system by acquiring all public service companies in Kuching City, Sibu, Bintulu and Miri City.

This is among 15 resolutions adopted at the 19th DAP Sarawak annual convention here today, and it is aimed at improving the regularity and standard of bus services.

“Provide free public bus services to the public in the first five years of its implementation,” it said in the resolutions distributed to the media here.

Apart from reforming public transportation, DAP Sarawak has pledged its support for the setting up of Village Community Management Council (MPKK) in Sarawak and the implementation of fuel subsidy scheme by maintaining the ceiling price of RM2.08 per litre in Sarawak, Sabah and Labuan effective Jan 1, 2020.

In addition, DAP Sarawak wants the Sarawak government to implement a fair and equitable land policy for all by guaranteeing rights such as renewal of land leases upon expiry and protecting the land right of natives in Sarawak through the issuance of land titles to Native Customary Right (NCR).

DAP Sarawak also urged the Sarawak government to adhere to the principles of transparency, fairness and good governance by implementing five proposals, with the first being introducing the Freedom of Information Ordinance to grant public access to information on government decisions.

Other proposals are appointing an opposition state assembly member as the Public Accounts Committee chairman, implementing open tenders for government projects, public bidding or open tenders for the sales and alienation of state land to developers or plantation companies.

The fifth proposal is to urge the Sarawak government to grant allocations to all elected members of the State Legislative Assembly regardless of their political affiliation.

The 15-point resolution was made available to the media after the convention, which was opened by party secretary-general and Finance Minister Lim Guan Eng today. – Bernama