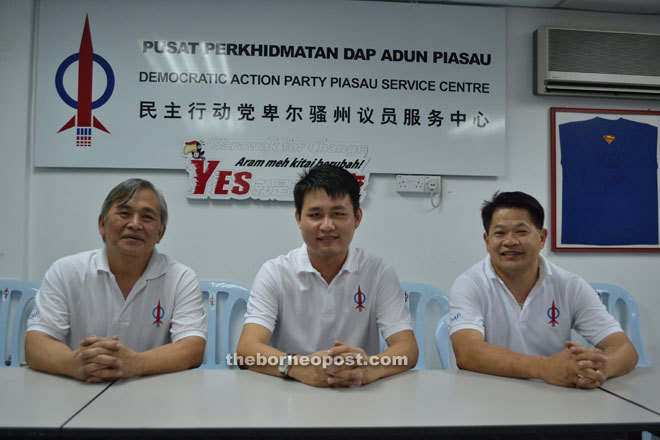 MIRI: DAP is confident of winning Pujut, Piasau and Senadin seats in this state election.

Chief Minister Datuk Patinggi Tan Sri Adenan Satem recently announced that candidates from SUPP would be fielded as BN candidates in these three seats in the northern region.

State DAP secretary Alan Ling Sie Kiong based their confidence on the feedback from the ground and the popularity of the party’s candidates who had been actively moving in the constituency since the last few years.

“DAP is confident of retaining Pujut and Piasau and capturing the Senadin seat from SUPP with big majority as the party has set its ground work to gain support from the voters there,” Alan told The Borneo Post yesterday.

According to Alan, the constituents have been warming up to DAP as shown by their response and attendance at events organised by the party because they want change.

He also said the constituents, including the Malays and Ibans, were now wiser and not easily influenced by the sweet talks and promises of the BN representatives.

He said he would be contesting in Piasau but would leave it to the decision of DAP top leadership if he should move to Senadin seat.

“It is up to the party’ decision to field me in Senadin or Piasau and I’m ever ready to face any SUPP candidate,” he stressed confidently. On the Piasau and Pujut seats, he said there had been no disputes between the Pakatan Harapan parties as the seats belonged to DAP.

He said the Pujut seat was formerly held by DAP but its incumbent Fong Pau Teck was sacked from the party and became an independent assemblyman.

Alan, who is also Piasau assemblyman, said either Dr Bob Baru or Dr Ting Tiong Choon would be contesting in Senadin and Pujut under DAP ticket.

According to him, both candidates have strong support from the Bumiputera and Chinese voters.

However, PKR had named Steve Teo as its candidate for Senadin. To this, Alan said DAP had a better chance of unseating the incumbent, Datuk Lee Kim Shin. Some 55 per cent of registered voters in Sendain are Bumiputera.

Lee won the Senadin seat with a majority of just 59 votes against PKR’s Dr Michael Teo.