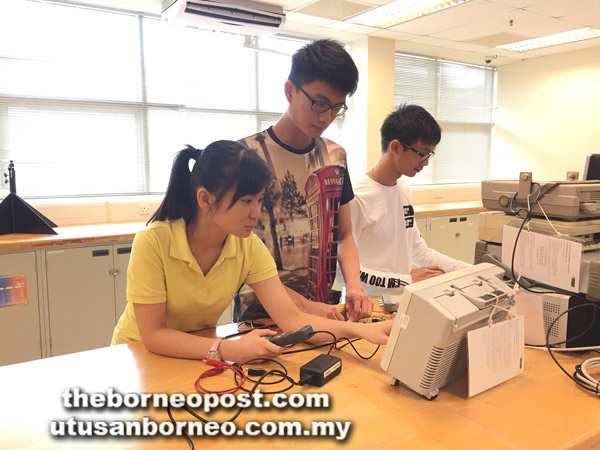 The team of Bong Chu Jun, Desmond Ting Zhong Xuan and Kong Sheng How conduct lab tests in preparation for the competition.

MIRI: Inspired by the success of their seniors in the Innovate Malaysia Design Competition 2016, two teams of students from Curtin University, Malaysia (Curtin Malaysia) are set to compete in the Keysight and Fusionex tracks in this year’s competition grand finals to be held in Cyberjaya on July 17 and 18.

The former team will showcase their project entitled ‘Development of XLPE Cable Diagnosis Platform’ while the latter will field their ‘Wireless Modular Sensory System for Smart Home Applications (Wi-MSS)’ project.

The goal of the competition is to promote an innovative culture in engineering design work, tackle real world problems with practical engineering solutions, and nurture talent for product development, research and commercialisation.

According to the project team, such challenges prompt them to innovate an alternative high-voltage alternating current testing method to ensure reliability and prolong the lifespan of underground cables. The method can be enhanced to determine PD fault locations and detect and localise PD faults for cable manufacturers and power transmission and distribution companies, as well as end-users of electric power.

According to electrical and computer engineering senior lecturer Dr Hendra Gunawan Harno, the students have been sufficiently trained and exposed to industrial technologies to join the competition. They have gained crucial research skills, hands-on technical skills and scientific communication skills.

He said with the excellent track record of Curtin Malaysia students in the competition, more are expected to join next year.