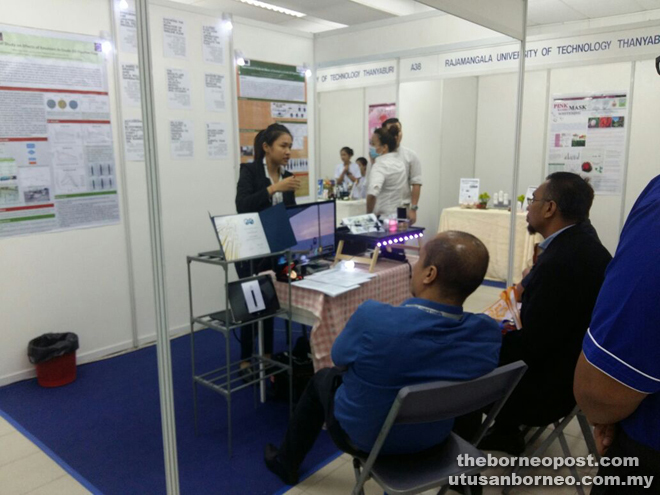 Chan presenting her research project to the judges.

The project entitled ‘Experimental Study on Effects of Emulsion in Crude Oil Pipeline Flow’ explored the presence of stable water-in-oil emulsions in pipelines that reduce the quality of crude oil and create difficulties in the water-oil separation process.

Thus more retention time was required in separation vessels which affect the volume and flow behaviour of the crude.

According to Chan, a novel lab-scale flow loop was constructed to study the formation of emulsions through flow shear. The flow loop attempts to replicate actual pipeline flow in the oil and gas industry.

The results allow researchers at Curtin Sarawak to re-appraise the competing theories of macroemulsions in pipeline flow by assessing the water cut impact on the flow in pipelines.

The project was funded by the Ministry of Education under its Exploratory Research Grant Scheme and the Curtin Sarawak Collaborative Research Scheme.

The crude oil used for the project was supplied by Petronas Carigali Sdn Bhd.

“We are very proud of Chan’s achievement, especially when the recognition is given by a prestigious research university like USM. It’s a testament of our research strengths and the quality of our students,” Sharul remarked.

The NRIC is an annual two-day competition established in 2006 to instil in university students the importance of incorporating R&D and innovation into their student projects. It served as a platform for them to showcase their talent and creative ideas to major industry players.