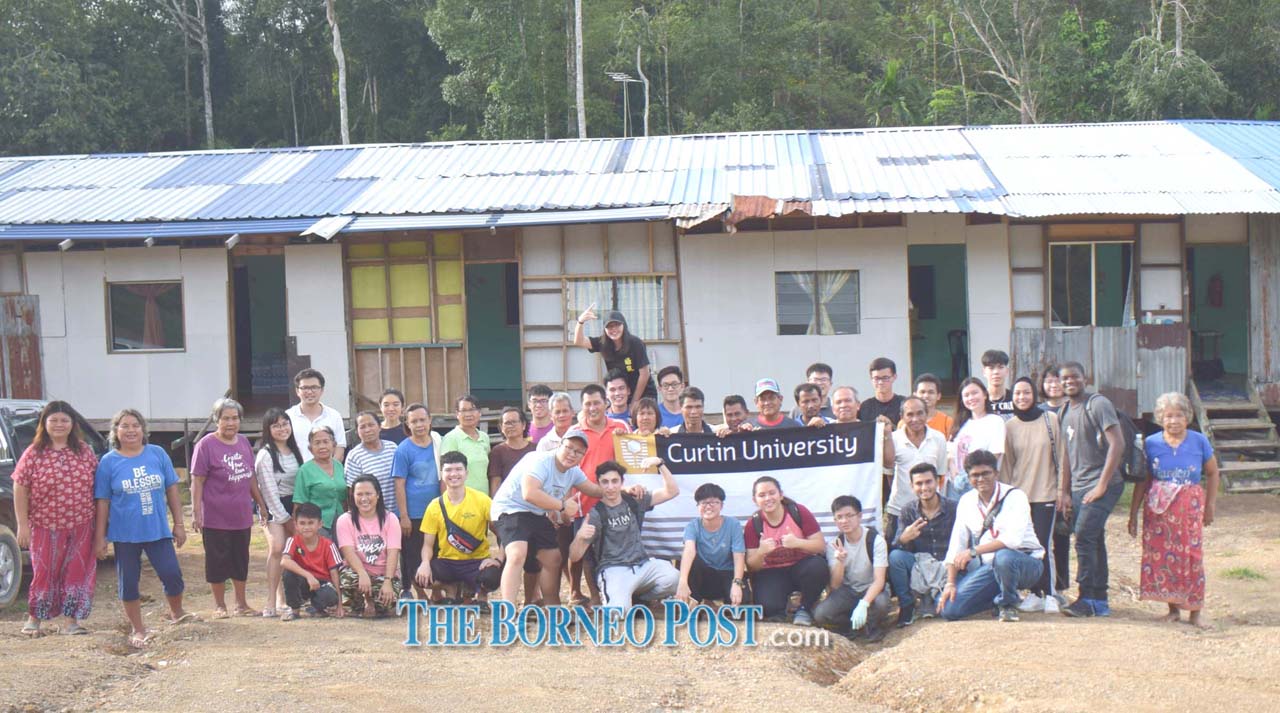 The Curtin Malaysia students in a group photo with the villagers of Kampung Sungai Sebatu.

The project was coordinated by a teaching team led by Dr Sukanta Roy, the head of the Department of Mechanical Engineering under Curtin Malaysia’s Faculty of Engineering and Science.

The activities were aligned with several objectives – among them was the Work Integrated Learning (WIL), aimed at enriching the students’ experience and enhancing the learning outcomes where students, working in teams, were required to apply engineering design processes learned in the classroom to solve real-life problems.

The importance of the United Nations (UN) Sustainable Goals 2016-2030 was also emphasised, in that the participating students were required to incorporate them in their community-based projects.

Sukanta said the Kampung Sungai Sebatu project, carried out over two semesters, involved introducing the community to good waste management and farming practices and also the benefits of composting food waste to produce cheap and environment-friendly organic fertilisers, in view of the majority of the villagers were engaged in subsistence and small-scale farming.

“The project was inspired by a talk on ‘Domestic Composts and Organic Fertilisers’ by Miri City Council (MCC)’s Mathew Benson Mounsey, who is a local expert on environmental preservation, which the students attended earlier this year.

“Core to Councillor Mathew’s talk was the use of the 5R strategy (‘refusing’ to use plastics, ‘reducing’ domestic wastage, ‘reusing’ sustainable alternatives, ‘recycling’ of various items, and ‘repurposing’ or composting kitchen waste) towards waste management, which the students adopted for their project,” said Sukanta in a statement released by Curtin Malaysia.

The project was also based on preliminary studies and consultation with the villagers by the project team, in which a number of difficulties faced by the community was highlighted including low income from farming and the lacking in transportation, electricity and water supply.

In the process, the team also learned about the community’s long-term aspirations.

Having assessed the community’s situation based on geography, climate, social lifestyle, economic conditions and other factors in their design evaluation, the students then worked on appropriate design solutions.

Sukanta observed that the villagers had been planting vegetables in their backyards for daily consumption, but had yet to practise systematic farming methods to ensure more consistent and efficient output.

“Most of them still buy most of their provisions from the market in Long Lama.

“In addition, the villagers tend to simply bury or burn their food waste at their own designated landfills, when (instead) they could have composted them to make fertilisers for their crops, instead of buying commercial fertilisers.”

The things highlighted during the project implementation included the advantages of using organic fertilisers over chemical fertilisers, the different types of composting methods, and also methods of making low-cost compost bins and ‘bokashi’ compost accelerators and juice, which could help accelerate the composting process by up to 50 per cent.

The students also demonstrated better farming practices and together with the villagers, they planted different vegetables such cabbages, eggplants, carrots and beans. They also donated the necessary gardening tools to encourage the villagers to be actively engaged in these new practices.

In his remarks, village headman Tuai Rumah Jemat, thanked Curtin Malaysia for contributing towards the development and welfare of the village community.

He hoped that further projects such as clean water supply could be implemented as currently, the 23-household community relies on the adjacent river and rainwater for their daily needs such as for cooking, bathing and cleaning.