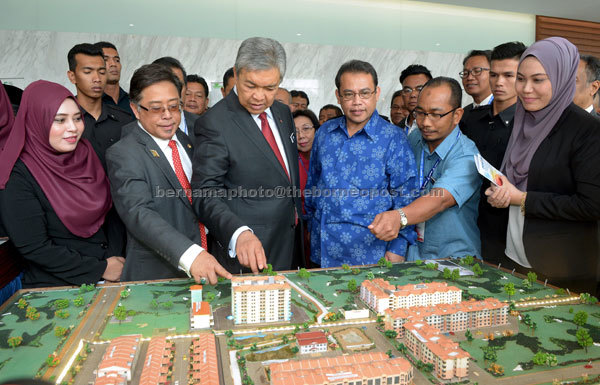 MIRI: The Congress of Unions for Employees in Public and Civil Service (Cuepacs) is unhappy with the new guidelines issued by Finance Ministry on steps to optimise government expenditures.

Its president Datuk Azih Muda said the circular on the new guidelines, uploaded by the ministry on the Malaysian government portal on Sunday, had created dissatisfaction among the civil servants, particular those working at junior level.

“Cuepacs disagrees with such approaches, particularly on the decision to close down new recruitment drives, the preference for vacancies to be filled via trade-offs and the abolishment of overtime allowances – all of which closely affect civil servants working at junior level.

“We are going to see Prime Minister Datuk Seri Najib Tun Razak next week and demand that the government study the new guidelines before proceeding with its implementation. This is an effort to regain people’s confidence in the government,” he said at a press conference yesterday, held in association with a seminar on ‘Malaysian Civil Service’ organised by state Cuepacs.

Azih said the Finance Ministry should make a study on this matter by getting views and opinions from civil servants.

“The ministry is not clear on what is happening at ground level – not all of government entities are under the same umbrella. This matter should be brought for

open discussion. What about the civil servants who work in faraway locations such as in Sabah and Sarawak, where the operation costs are relatively high?

“Although Malaysia is now facing economic challenges following with the drop of oil prices and currency value, such new guidelines to optimise government expenditure is not suitable.”

In addition to this, Azih said the approaches imposed on all sections in the government were too strict, making these sections unable to extend their activities across a wider coverage due to limited financial and manpower resources.

“The effort to close down new recruitment drives to bring in school-leavers and young graduates to work in the public sector is not good for the country, which is in the process of transformation towards a developed nation status.

“What would happen to the civil servants at junior level who depend greatly on overtime allowances to supplement their low pay?”

On another issue, Azih said there was a need to restudy the allowances for civil servants serving in Sabah and Sarawak, due to the complexity of work and geographical issues in both states. At the same time, he also suggested that perhaps, the government would consider amending its policy on government quarters, which could be turned into a rental concept.