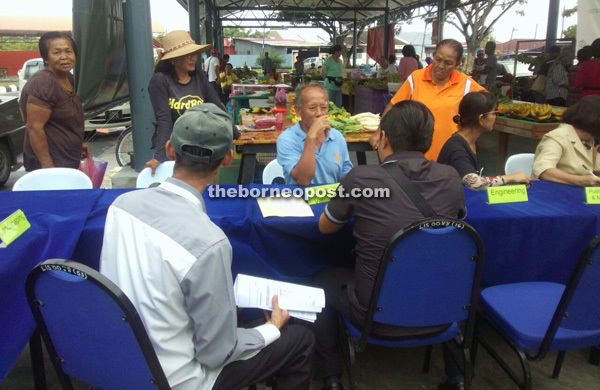 Members of public forwarding their problems and complaints to the council’s officers during the council’s meet-the-people session.

MIRI: In an effort to improve its services, Miri City Council (MCC) held a ‘Meet-the-People Session’ at Morsjaya Commercial Centre Friday which received encouraging response from members of the public.

A spokesperson for the council, councillor Rantai Achin described the session as most fruitful where many people turned up to forward their complaints and problems on council services.

“The council hopes more people will come forward during our next session which is scheduled on Oct 21 at Lutong Market.

“It is important for the people to attend such events in order to have one-on-one session with officials from the council’s various departments. If members of public have any issue on council services that they are not clear with, they are welcome to the session and the officials as well as the councillors are there to see to their problems and complaints,” he told the media when met at the session.

On public cleanliness and maintenance, the council received five complaints during the session where the issues were on refuse collection (3 cases) and problems of stray dogs as well as illegal refuse dumping.