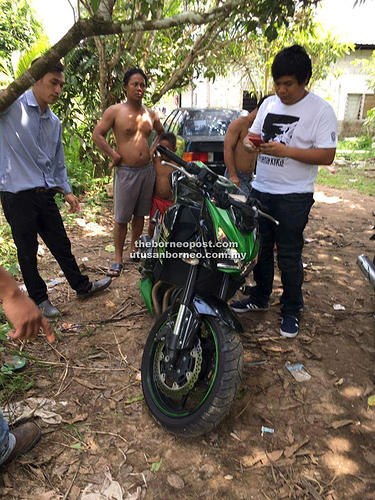 Curious onlookers take a closer look at the stolen Kawasaki found abandoned at the village in Santubong.

KUCHING: Police solved a three-year-old car theft case in Miri with the arrest of a suspect and recovery of the vehicle in question.

District police chief ACP Abang Ahmad Abang Julai said the breakthrough of the case was made at 11pm on Monday when personnel from the Mobile Patrol Vehicle (MPV) unit were conducting a routine check on vehicles parked at a commercial centre at Mile 3.

“Upon inspecting a Toyota Caldina parked in front of a 24-hour coffee shop, it was detected that the vehicle had been affixed with the license plate number belonging to a Toyota station wagon.

“MPV personnel then conducted a stakeout for about 30 minutes and later arrested a male suspect, moments after he appeared and got into the vehicle,” he said when contacted yesterday.

Abang Ahmad added that subsequent checks revealed the suspect to be a 26-year-old from Miri, while the Caldina was reported stolen along Jalan Bintang in Miri on Jan 7, 2013.

The suspect is currently being held in the lockup pending further investigation.

Separately, members of the public found a big bike abandoned at a village in Santubong a day after it was reportedly stolen during a house break-in.

The bike in question, a Kawasaki Z800, is said to belong to a woman who had locked the bike inside her house at Jalan Astana as she is currently away from home.

The thief is believed to have gained entry by forcing open a window at the rear of the house before disabling the closed circuit television system and then making off with the bike.