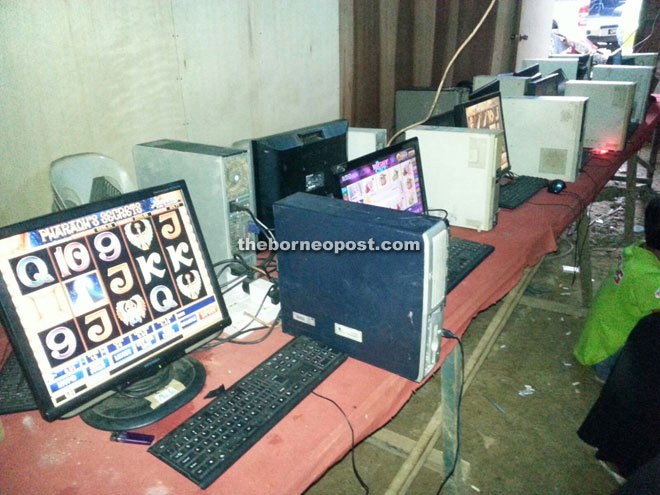 Police found a set of computers, believed to be used for illegal cyber gambling, inside an extended section of the house.

MIRI: A weekend raid on an unnumbered wooden house at Mile 42 of Jalan Bintulu-Miri in Niah has uncovered an illegal gambling operation.

State CID head SAC Dev Kumar Sree Shunmugam said several detectives from the central police station (CPS) here, led by Insp Nasrul Hadi Jahat, were involved in the 5am ‘Ops Dadu’ on Saturday, which was set up following a tip-off and days of surveillance.

Police arrested 18 people, including a 38-year-old woman who was the house owner.

“We apprehended 17 men and a woman whom we believe was the operator of the gambling den,” SAC Dev Kumar said in press statement yesterday, adding that his men discovered that the illegal operation was being run inside a section of the house that they believed had been extended illegally.

Eighteen computers and related software and equipment, as well as cash amounting RM305 were confiscated from the premises during the operation.

“The value of the seized computers and related equipment is estimated at RM35,000,” said SAC Dev Kumar, adding that the raid was a continuation of the success that the force had achieved throughout last year in their fight against illegal cyber gambling in the state.

“From Jan 1 until Dec 31 (2015), police through their district CID units had conducted 565 successful raids on illegal gambling operations across Sarawak, resulting in the arrest of and charge against 2,586 people, confiscation of cash amounting to RM205,000, and seizure of 9,140 computers and slot machines valued at RM15 million.

“Most of these computers have been disposed of by the police under the order of the court,” he added. SAC Dev Kumar also assured the public that the CID would continue the war against illegal cyber gambling in Sarawak this year.

officers-in-command) to ensure that their districts would be free from illegal cyber gambling and slot machine operations,” he said.