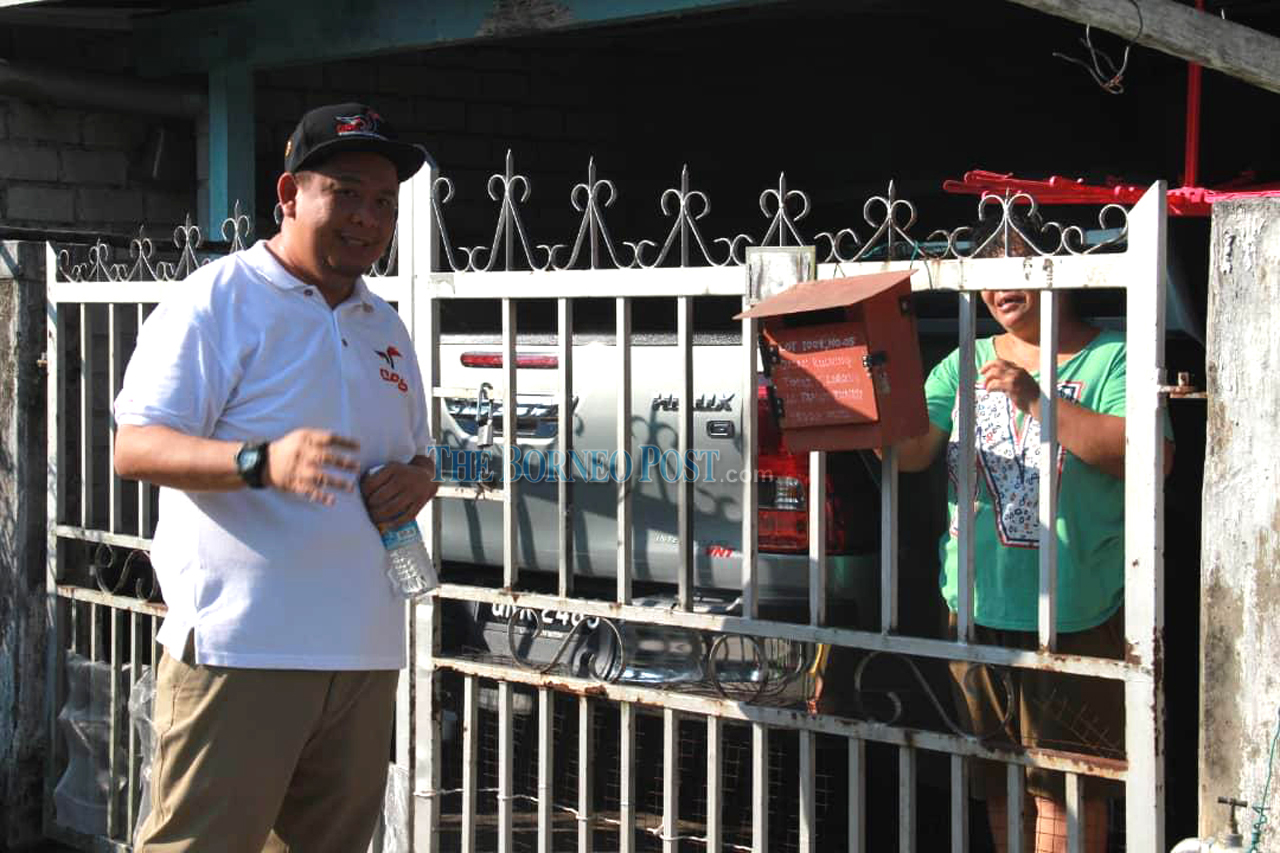 Lukanisman giving advice to a Taman Tunku resident on the dengue outbreak in the area during his recent house-to-house visit.

MIRI: The efforts to tackle the current dengue outbreak at Taman Tunku and Tudan should not be solely shouldered by Miri City Council (MCC) as the residents must also play their part to combat the disease.

Sibuti MP Lukanisman Awang Sauni said without total cooperation from the residents, it would be a hard task for MCC as well as the Health Department to control the outbreak effectively.

“I’ve released several statements the past three months to express my deepest concern regarding the dengue outbreak in Taman Tunku where the cases of dengue fever are relatively high compared to other places in Miri.

“Therefore, it is important for Taman Tunku residents to work hand in hand with MCC and Health Department in order to control the outbreak,” he stated to The Borneo Post yesterday.

He was asked on the media statement by Sarawak Health Department director Dr Jamilah Hashim on Monday that dengue cases in Miri District had skyrocketed over seven folds to 248 cases this year, including one death in Taman Tunku.

Lukanisman further said several series of anti-Aedes mosquito campaign had been conducted at Taman Tunku since the first dengue fever case was reported in the area.

He also said he had advised house owners on the importance of taking precautionary measures against the disease during his rounds of visit to Taman Tunku.

But he expressed his disappointment that there was poor response from the residents to the gotong-royong activities conducted in Taman Tunku.

“I was very frustrated upon seeing poor response from the Taman Tunku people to the campaign. Without total support from the residents, it will be a tough task for the local authority and relevant departments to put an end to the dengue outbreak.”

In view of that, he advised the people in the area to start clearing their homes and compounds of Aedes mosquito breeding grounds and receptacles regularly.

“The most important thing is to ensure there is no place for Aedes mosquitoes to breed,” he said.

He also urged the residents to cooperate with health officers when there is a need for them to conduct house checking.

“I’ve received a number of complaints on vacant houses in Taman Tunku which have become breeding grounds for Aedes mosquitoes. There are people who requested for fogging but this operation is a short-term solution which only kills the adult mosquitoes. The fogging operation will not be able to stop the dengue cases if the house compound remains dirty.”

He also called on the management of houses of worship in Taman Tunku to educate their congregation on the need to give their cooperation to the anti-dengue campaign.

He also welcomed suggestions and ideas on alternative approaches to handle the dengue issue in Taman Tunku.