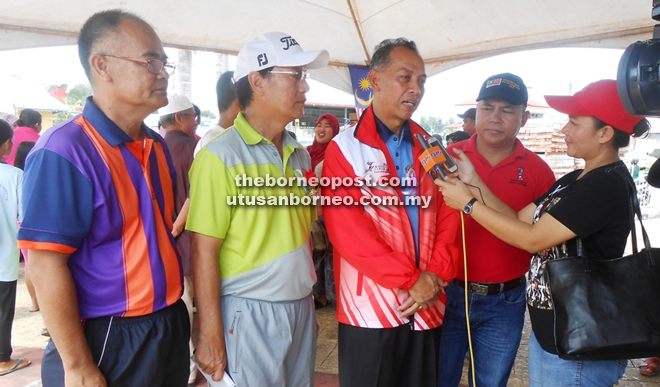 Penguang speaks to the media. Gerawat is at second left.

MARUDI: Construction work on the 44km Miri-Marudi road, which began in the middle of the year, is progressing well.

“Now the contractor is concentrating on the structure of the road and levelling work on the high hill,” he told reporters after a 1Malaysia Community event here recently.

“This is my KPI (key performance indicator) as the Marudi elected assemblyman and my priority is the road should be completed within these 30 months.” Meanwhile, State Legislative Assembly Deputy Speaker Datuk Gerawat Gala, who is Mulu assemblyman, said the road to Kuala Tutoh is beginning to be implemented, while Long Terawan can already be reached by road from Miri via Long Lama using a timber track.

“But we have to improve the road situation over time,” he said.

Gerawat said he would also focus on clean water supply to the longhouses in the Poyut-Lubok Nibong area that are under his constituency.