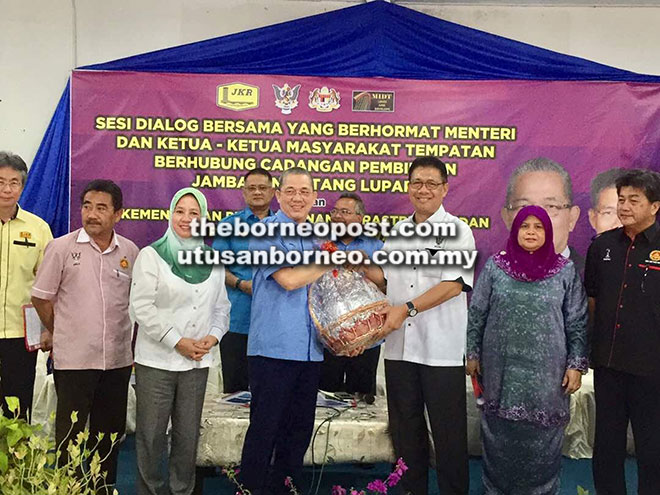 Julaihi (third right) presenting a souvenir to Fadillah as other guests look on.

SEBUYAU: The tender for the construction of Batang Lupar bridge will be awarded to the successful contractor next year, says Works Minister Datuk Seri Fadillah Yusuf.

He said the five- kilometre bridge believed to be the longest in the state, has been approved at an initial cost of RM1 billion and the cost shared between federal and state governments on 50- 50 basis.

“The proposal to build Batang Lupar bridge has been approved in principal and the cost shared between the federal and state governments. A consultant has been appointed and has carried out initial study (on the project), and the tender will be issued next year.

“The allocation for the project is already available, “ he told reporters yesterday, adding that a consultant from the state will also be appointed for the project.

He had earlier attended a discussion with more than 300 local community leaders from villagers within the project area, held at Sebuyau Area Fishermen Association (PKNS) hall, here.

The discussion was to receive feedback from the local community leaders on the preferred site of the project because two options were laid on the table as the site for the proposed bridge.

Asked whether the project would be completed in the current 11th Malaysian Plan, Fadillah replied: “Normally it takes between 26 months and 60 months to complete depending on the complexity of the projects, and for this one I believe it will take a longer time because the bridge is quite long.”

He pointed out that the construction of the bridge is quite challenging due to the strong water current and a marine risk study will determine the method to be used for its construction.

The minister also said that the study for the project will include the social economic impact to the locals and the state in general, marine traffic risk analysis, environmental impact assessment (EIA)and road safety audit (RSA), among others.

Fadillah said he personally preferred Option One of the project site, which is about one kilometre down from the Batang Lupar ferry ramp and to include upgrading of 1.75 kilometres of road near Sebuyau and the construction of 0.47 km of road near Triso.

According to him, the site would have less impact on marine life and will boost the tourism sector in the area, adding that a look-out point will be designed for the people to watch the beautiful surrounding area.

He also said the construction of Batang Lupar bridge was made possible due to the good relationship between the state and federal governments.

Earlier, Julaihi in his welcoming speech, said the coastal road network was necessary to connect coastal areas and towns, adding the the people in coastal areas were missing out on the benefits of the Pan Borneo Highway.

Julaihi pointed out that the coastal connectivity programme was first mooted in the 5th Malaysia Plan, to link the densely populated and predominantly poorer areas along the state’s coastline from Sematan to Miri and the main towns in the state.