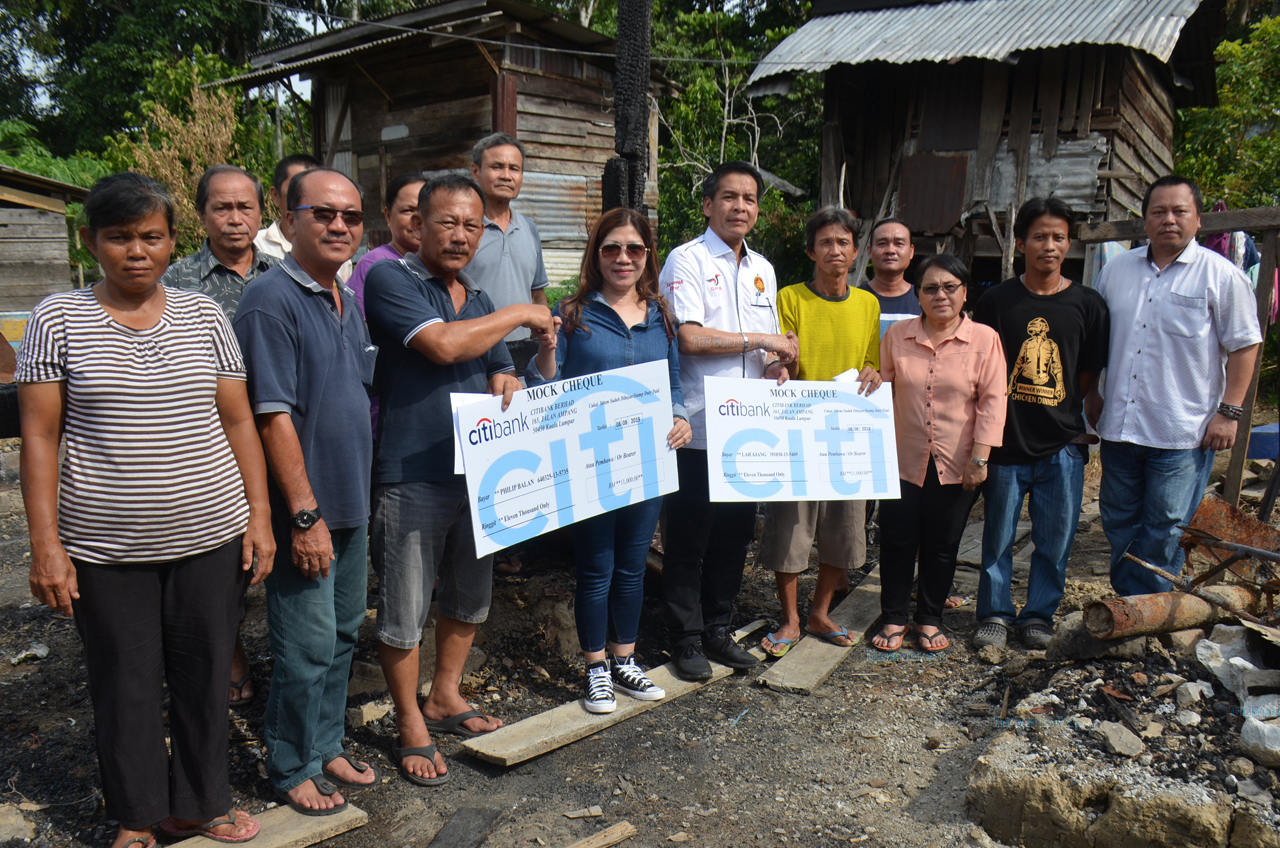 Dennis (sixth right) and Baun on his right present mock cheques to victims of a recent fire incident at Long Ikang during their visit to the longhouse yesterday. Also seen is Dominic (right).

LONG IKANG, Telang Usan: Dennis Ngau said his responsibility as assemblyman is not only to bring progress to his constituents but also to ensure that they live in a safe and peaceful environment, protected from the consequences of natural disasters.

The Telang Usan assemblyman cited the Allianz KampungKu by Allianz Malaysia Berhad as an affordable insurance plan for village wooden houses and properties within against fire, flood and windstorms.

He said this insurance provides emergency relief benefit for the loss caused by natural disasters, and personal insurance for death, permanent disablement and funeral expenses of the insured or an immediate family member.

“We, the people’s representatives do not profit from this. We are just promoting (insurance plan) as it is our responsibility. We just provide you advices, it is up to you whether you want to get it or not and we do not force you to do so,” said Dennis at a ceremony to hand out mock cheques of insurance compensation money to victims of a recent fire here yesterday.

In the fire incident on July 26, the longhouse located in Baram was saved from being razed to the ground by the swift action of its residents and villagers. It only damaged the kitchens of three units in the 74-door longhouse. No casualties or injuries were reported and no one was left homeless.

Only two owners of the kitchens accepted Dennis’ advice to purchase the Allianz KampungKu insurance.

“I was informed that one of the three victims (of the kitchen fires) did not want to believe in the insurance plan. The proof is here. I have brought along today two cheques for RM11,000 each to the other two victims.

“This proves that what I had said to you is true and not just rhetoric,” he said.

“Although the incident had caused the victims a great loss in terms of properties, the insurance compensation can at least cover some of the costs of rebuilding the house razed by the fire,” Dennis added.

The assemblyman thus called on the rural people to change their mindset and be open minded about proposals such as buying property protection insurance.

Commenting further, Dennis said Allianz KampungKu is the only insurance plan that offers insurance package for longhouses, which he deemed as a high-risk property.

“They are very concerned for the welfare of the longhouse residents and willing to offer this insurance package based on their Corporate Social Responsibility policy,” he explained.

The handing-out of compensation money from Allianz was the first of its kind to be done for fire victims in Telang Usan constituency.

With only a premium payment of RM75 for 12 months or RM6.25 per month, the insured will be protected under the insurance plan.

“I hope this compensation and assistance from the state government through the Welfare Department can be used immediately to rebuild the affected parts or houses,” Dennis added.

To facilitate the longhouse residents of Telang Usan to participate in the insurance protection plan, Dennis disclosed that he had requested for the Allianz KampungKu insurance plan forms to be provided at PBB N77 Telang Usan Community Service Centre, Luak Bay in Miri.

Dennis praised the longhouse residents who braved the blaze to put out the fire and prevent it from spreading through the longhouse.

He also applauded their efforts in forming a volunteer fire fighting unit.