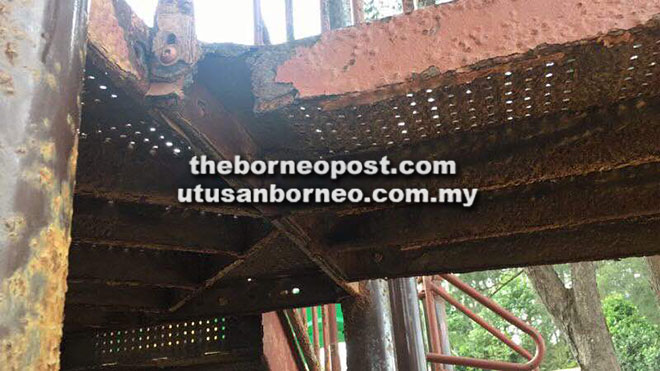 This severely rusty metal platform could collapse at any time, posing danger to those at the playground. 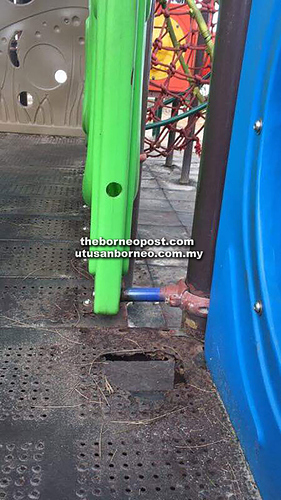 A huge hole at the platform poses danger to the children playing at the recreational park. 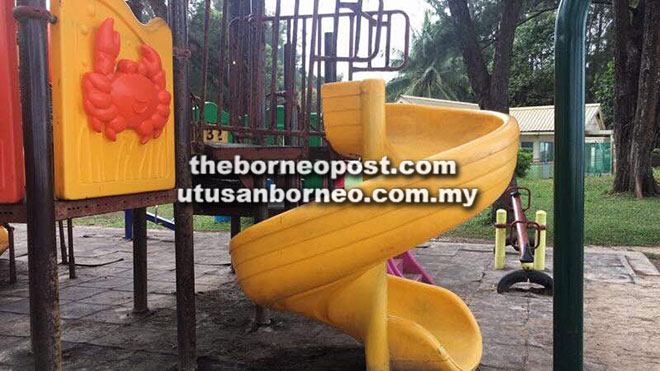 Other facilities at the playground that also need serious maintenance works.

MIRI: The authorities should take note of the damaged facilities at the playground in Tanjong Lobang here as they could cause injury to the users, especially the children.

A concerned parent who wanted to be identified only as Lau related to The Borneo Post about his anxiousness over the dangerous state of the recreational park after noticing that most parts of the equipment there had become rusty and could break down at any time.

“When I accompanied my children there over the weekend, I noticed that when my son jumped on the rusty metal platform, it became very unstable.

“I understand that the equipment and facilities are mostly made of metal. As the park is located at the beachside, this aggravates the corrosion.

“To make the matters worse, I’ve noticed that there has not been any maintenance work done by the private company, which took over the recreational park a couple of years ago. Being categorised as a private area, I cannot help but to remind the company that they open the area to the public as there is a lot to offer with the various restaurants there.

“At the same time, those with children would also bring their little ones to the playground for a little out-and-about before or after meal times.

“Therefore, it is of utmost importance to make sure that the area is safe for the children.”

Lau, who has four children, added that although the problem had been going on for a long time and there had been numerous complaints from the public, he was still hopeful that the relevant authority could conduct maintenance works on the playground facilities for the sake of safety.

“We are willing to pay for a decent meal at one of these restaurants but at the same time, we also hope for similar service and facilities at the playground.

“Most certainly, I do not wish to see any accident to happen. Perhaps it is only then that the private company would take action or conduct the maintenance works, which should have been done from time to time,” he said.