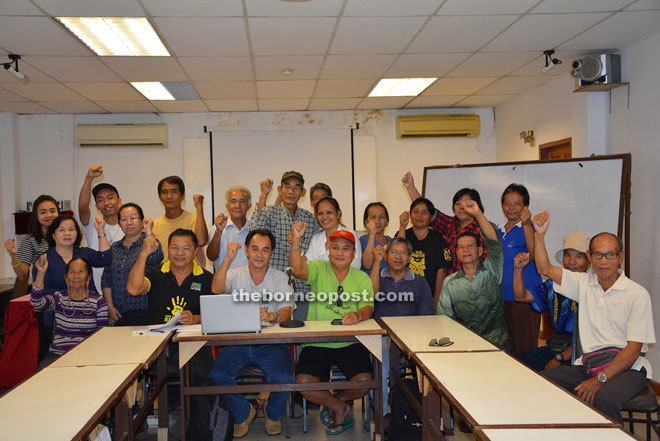 Philip (seated third left) with some members and supporters of BPAC after the press conference.

MIRI: Baram Protection Action Committee (BPAC) says the revocation of the gazettes of the extinguishment of native customary rights (NCR) land for the Baram Dam project and also its cancellation are just political gimmicks to gain support of Baram folk this upcoming state polls.

Speaking at a press conference here yesterday, BPAC chairman Philip Jau said many of them were worried as Chief Minister Datuk Patinggi Tan Sri Adenan Satem had yet to make a public statement about the revocation and cancellation of the dam.

“We have made a statement published on April 1 where we demanded that Adenan made public the announcement on the revocation of the gazettes of the extinguishment of the NCR land for the dam and the cancellation of the dam.

“However, he has not done so, which is why we are worried. Could this be a political gimmick by the Barisan Nasional (BN)?” he asked.

Philip said it was crucial that the announcement of the cancellation of the dam and the revocation of the gazettes of the extinguishment of the NCR lands for the Baram dam project be made public because many people in Baram were not aware of the real situation.

He also said the committee and the majority of the people in Baram were not against development such as improving infrastructure, facilities and amenities but not development that was destructive to the environment and badly affected the livelihood of the people.

He thus hoped the new government formed after the state election would recognise the decision made by the past government to scrap not only the Baram Dam but also other dam projects throughout the state.