CNY do a showcase of rich cultural diversity 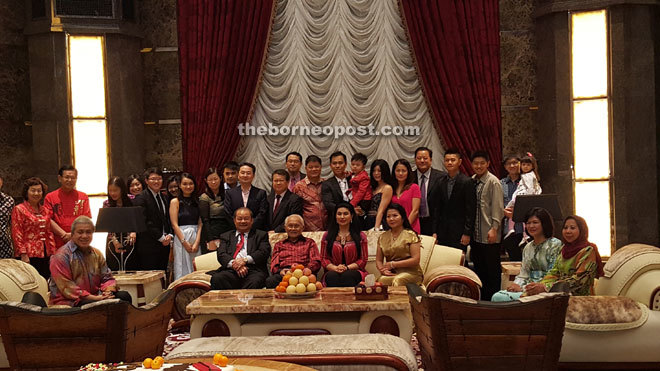 Taib (seated third left), flanked by Ling (left) and Raghad, poses for a photo with his entourage and Ling’s family members.

MIRI: The Chinese New Year celebration which entered its third day yesterday continues to showcase the people’s appreciation of the rich cultural diversity of the various races in Malaysia.

Head of State Tun Pehin Sri Abdul Taib Mahmud and his wife Toh Puan Datuk Patinggi Raghad Kurdi Taib were among those in Miri City who joined in the celebration to extend the season’s greeting of Gong Xi Fa Cai.

Yesterday was the second day their excellencies joined the locals for the celebration of the Year of the Fire Monkey.

On Tuesday night, Taib and his wife were guests of honour at the Chinese New Year dinner hosted by the founder and group executive chairman of Shin Yang Group of Companies, Tan Sri Datuk Ling Chiong Ho.

In keeping with the Chinese tradition, the hosts greeted their excellencies and entourage with dragon and lion dance performances, a prancing monkey icon, and also a brass band, apart from serving them traditional fruits and dishes.