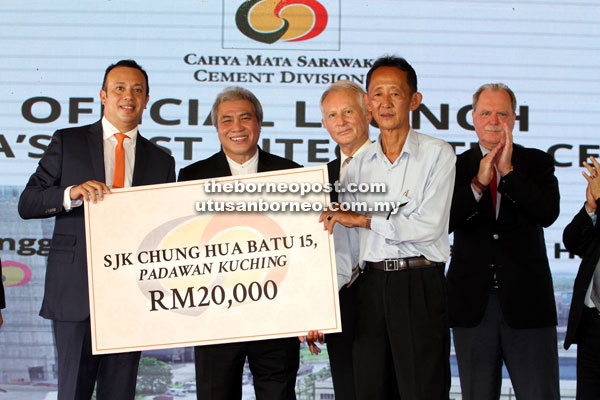 Syed Ahmad (left) presenting the mock cheque to a representative from SJK Chung Hua Batu 15. Also seen in the picture (from right) are Holger, Curtis and Awang Tengah. — Photo by Chimon Upon

KUCHING: Cahya Mata Sarawak Berhad (CMSB) will be able to produce a year-round reliable supply of cement across the state following the full commissioning of its third and largest cement grinding plant in Mambong here.

Its group managing director Datuk Richard Curtis said the third plant, which has been integrated with the adjoining clinker plant, would increase CMSB’s total annual rated cement production capacity by almost 60 per cent to 2.75 million metric tonnes, well above current local demand of around 1.7 to 1.8 million metric tonnes.

He said this would enable CMSB to meet growing cement demand in Sarawak, including from big projects such as the Baleh dam and the Pan Borneo Highway and to have significant reserve production capacity to materially reduce the risk of supply disruptions.

“It will also enable us to extend our supply into nearby export markets as well as to produce more than one type of cement,” he said at the launch of East Malaysia’s first integrated cement plant yesterday.

With the significant quantities of slag and other waste materials now becoming available in the state, Curtis said CMSB’s three cement plants would also be better able to recycle such wastes into cement and other road and construction

materials, thus significantly reducing the state’s level of industrial waste and supporting the sustainability agenda, something that is of great concern to the international investment community.

He pointed out that CMSB’s investment into its cement division over the last 10 years had exceeded RM600 million, ranging from acquiring the clinker plant, setting up storage terminals in Miri and Sibu to general plant upgrades, three dedicated cement carrying barges and most recently the integrated plant.

“All this is testament to CMSB’s sense of responsibility that comes with its position as a major supplier of construction materials within the state.

“We also have sought to be a responsible corporate citizen engaging with the local community to give back, carefully limiting emissions and ensuring uninterrupted supply of quality cement at market price,” he added.

The new grinding plant was built at a cost of RM190 million to anticipate the growing demands of a rapidly expanding and developing Sarawak.

It promises to maximise efficiency and quality with minimum downtime.

The engineering, procurement and construction contract for this plant was awarded to Christian Pfeiffer Maschinenfabrik GmbH, a leading German company in this sector, in April 2014.

Construction began in July 2014, production ramp up commenced in December 2015 and it was fully commissioned earlier this year.

Later after the launch by Second Minister of Resource Planning and Environment Datuk Amar Awang Tengah Ali Hasan, who represented Chief Minister Datuk Patinggi Tan Sri Adenan Satem, a memorandum of understanding (Mou) was signed between CMS Clinker Sdn Bhd and ZHA Environmental Sdn Bhd to enter into negotiations for the use of shredded rubber tyres as an alternative fuel in the production of clinker.

Also present at the ceremony was German Ambassador to Malaysia Holger Michael.