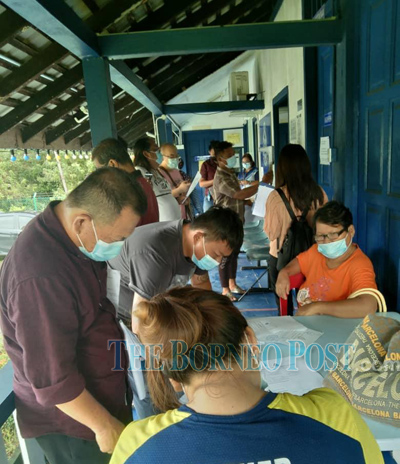 MIRI: Those seeking to travel out of Miri during the Conditional Movement Control Order (CMCO) which came into force in the district yesterday, made their way to Tanjung Lobang police station here to apply for inter-district travel permit.

Petty trader Salmah Edin said she brought along her identity card, trading licence and other relevant documents when applying for the inter-district travel permit at the Tanjung Lobang police station yesterday.

“I need the permit to be able to pass through the police checkpoint near SMK Agama Miri and also near Lambir.

“I have to travel to Bekenu to buy jungle produce and fruits and then return here to sell at the ‘tamu’ (farmer’s market) in Luak,” she said when met.

She said there was a line of people similarly applying for the permit at the police station, but she did not mind queuing up so long as everyone adhered to the standard operating procedures.

Salmah added that she knew the process involved in applying for permission to travel out of the district as she had previously done so during the Movement Control Order period last year.

Miri, Sibu and Kuching were placed under the CMCO for two weeks effective yesterday following a surge in Covid-19 cases which resulted in the three districts declared as red zones.

Also met at Tanjung Lobang police station yesterday was cargo transporter Ling, who said he applied for a permit as he needed to travel to Bintulu and Sibu to deliver shipments of food and drinks.

“I was given a two-week police permit to transport the items out of Miri,” he said.