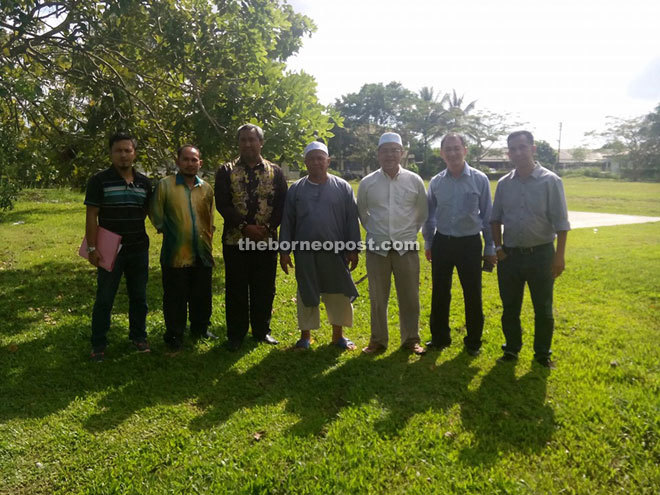 Abu Hurairah and Abang Mohamad (centre and third right, respectively) with representatives of Jais and Land and Survey Department at the proposed site for the new surau in Phase 2 of Desa Senadin.

MIRI: The decade-long wait by the Muslims of Desa Senadin here has finally ended, following the approval by Chief Minister Datuk Patinggi Tan Sri Adenan Satem on their request for a land to build a new surau.

The announcement was made during a courtesy call on Adenan by the committee of Surau Abu Bakar As-Siddiq Senadin, led by its imam (congregation head) Abu Hurairah Mohamad recently.

“The chief minister’s assurance is truly a relief not only for us, but the whole Muslim population in and around Desa Senadin who have been waiting for the setup of a full-fledged, permanent surau for more than 10 years.

“We, the surau committee led by our chairman Abang Mohamad Abang Deli, and fellow Muslims in Phase 1 to 6, Green Villa, Curtin University Sarawak and Desa Ras, are grateful to the chief minister who has heard our plight and immediately granted a land to build the new surau.

“He is truly a leader who walks the talk — one for all Sarawakians. He is assured of our ongoing, undivided support and also mandate for him to continue leading Sarawak,” he told The Borneo Post here yesterday.

Currently, a single-storey corner terraced unit at Phase 2 is serving as a temporary surau not only for the Muslims in the neighbourhood, but also those from the university and surrounding housing estates.

Abu Hurairah said they had to make do with the facility, which could barely accommodate the congregation during normal weekdays — let alone throughout the fasting month of Ramadan.

According to him, the surau committee met Adenan during last weekend’s ‘Sejiwa Senada 2016’ programme here where he (Adenan) officiated at the opening.

“There were also officials from Jais (State Islamic Affairs Department) and Sarawak Land and Survey Department at the meeting, where the chief minister assured us of his approval for a parcel of land in Desa Senadin as the site of the new surau.

“From our understanding, the exact site is near the recreational park in Phase 2,” he said.

Abu Hurairah also stated that there would be another meeting between the surau committee, Jais and Land and Survey Department at the end of this month on setting up a building committee.

“Apart from working out on the details of the surau project, the committee will also be seeking funds from corporate bodies.

“We will also be working closely with Majlis Islam Miri (Islamic Council) to expedite the implementation of the project,” he said.

On the surau committee’s planning for the year, Abu Hurairah said they would collaborate with relevant authorities on holding programmes slated for the benefit of the local Muslim community, especially the youths.

“With the new surau, it would be easier for us to organise the activities,” he added.