CM bowls ’em over with wit: ‘Najib anak Razak cares for us’ 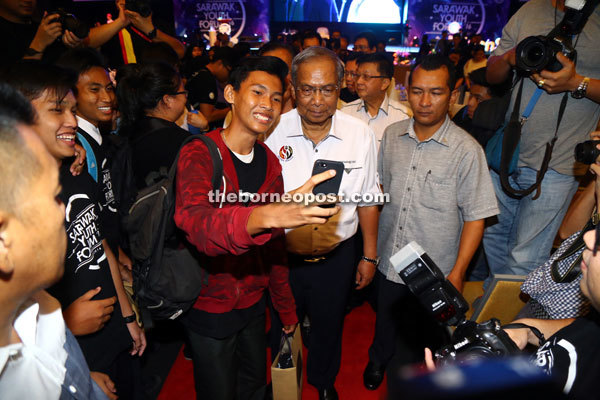 A young forum participant takes the opportunity to take a selfie with Adenan. — Photo by Muhammad Rais Sanusi

KUCHING: The one-liners made by Chief Minister Datuk Patinggi Tan Sri Adenan Satem on his close rapport with Prime Minister Datuk Seri Najib Tun Razak are ‘bang’ on target, despite the serious undertones of his humorous wit.

“I (Adenan) want to make more money for Sarawak,” was his latest rejoinder to a question posed to him during Sarawak Youth Forum 2016 at Borneo Convention Centre Kuching (BCCK) yesterday, which drew laughter from the 2,500-strong crowd.

Adenan quickly added: “The prime minister is the one person who can give us more money. Let me tell you this — he cares for Sarawak.”

He then quipped: “I may not be a good judge of character, but ‘Najib anak Razak’ is a good friend to Sarawak.”

The question posed earlier by a forum participant asked why Adenan gave his support to Najib, even when the premier was ‘not popular in Sarawak because of certain incidents’.

On this, Adenan pointed out that Najib had visited the state 49 times since he was sworn in as prime minister six years ago.

“There’s one (former) prime minister who was in office for 22 years and he seldom visited us. And you know who I mean ‘lah’. As for Najib, he comes (here), not just with smiles and empty hands.”

“I ask him to give us back the powers that are meant for Sarawak, and he doesn’t say ‘No’. He says: ‘Let us talk about it’.”

Adenan also stressed that Sarawak was not ‘just a state in Malaysia, but one of the founding states to form Malaysia in 1963’.

He said the federal government ought to honour the Malaysia Agreement 1963 signed between the sovereign states — the Federation of Malaya, North Borneo, Sarawak and Singapore.

“If we did not sign the agreement, there would be no Malaysia. So I want those powers back to Sarawak — he (Najib) keeps an open mind.

Later, another participant asked about how young entrepreneurs could take part in the implementation of Pan Borneo Highway project. To which Adenan responded: “If you invest one dollar in a business enterprise, you create a multiplier effect. When you want to build a bridge, you need engineers, cables, machines and so on.

“With a mega project like Pan Borneo Highway, hundreds of contractors would be required even though there would be only one major contractor.

“The main contractor cannot do it all. For every dollar invested, it would come back four dollars because of the multiplier effect.”

On another question, Adenan said the Centre for Technical Excellence (Centex) “is open for all youths”.

However, he said some people still had the prejudice against technical education as they preferred white-collar jobs to those of blue-collar ones.

Another question sought an explanation on why some politicians had been banned from entering Sarawak.

To this, Adenan said his administration stopped only religious bigots and extremists from coming to the state; not just the opposition.

One of the non-opposition leaders he mentioned was Perkasa president Datuk Ibrahim Ali and moreover, he (Adenan) disclosed that some individuals from Umno had also been banned.

The chief minister said these non-opposition leaders did not make noise like those from the opposition did via the press or social media.

“There is no state in Malaysia like us, who live together in peace. So I do not want people to destroy that, to poison our society (and make us) hate one another. If you are insinuating that we only ban the opposition, I can tell you that (such claim) is not quite true.”

One of the youths then prompted for Adenan’s opinion on ‘social media censorship’, to which the response was: “Freedom comes with responsibility.”

“Freedom of speech is not unlimited,” Adenan stressed. “(If) you give complete liberty to people, they would abuse it. At the same time, people must also be allowed to think. So you must get a balance between freedom and responsibility.”

On another question, Adenan conceded that racial prejudice prevailed due to the fact that the civil service was dominated by the Malays.

However, he pointed out that the majority of the applications received did not come from the Chinese community, which resulted in the current racial composition in the public sector.

“There are more Chinese in executive positions in government-linked companies. I don’t have the figures now, but the state secretary could tell you more.”

When asked for his view on women’s participation in politics and the issue of gender discrimination, Adenan concurred that women ought to be treated equals to men.

He also believed that any position should not be given to women just for the sake of fulfilling the quota system that had been put in place.

“The policy ought to be (on) treating women (as) equally (as men). They must be given proper roles and liberty.”

Towards the end of the forum, a youth from Miri put forward a personal request to Adenan, asking the latter to support her ‘Paint The World’ movement.

She explained about her efforts in drawing general attention to the importance of recycling and at the same time, saying that she also aspired to succeed and perhaps become the chief minister of Sarawak one day.

As soon as she said that, Adenan quipped: “Good luck to you, but the present position is still filled!”

The chief minister then concluded the one-hour forum by offering this advice: “Whatever you do, take pride in it and do it well.”