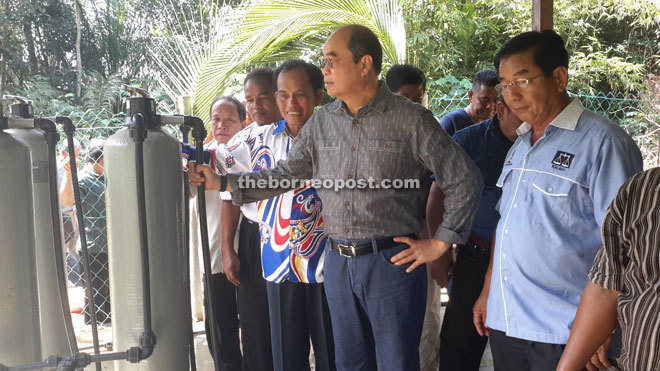 MIRI: Rumah Wat Ukak residents now get to enjoy clean water through an Ultra Filtration system implemented by the Department of Minerals and Geoscience.

“This is one way the government supplies clean water to villagers in remote areas,” he said after commissioning the system at Rumah Wat Ukak yesterday.

Previously, he pointed out, Rumah Wat Ukak residents depended on river and rain water for their daily use. During the dry season, their only water source was Sungai Peking.

With the filtration system in place, they now have round-the-clock access to clean water.

Entri reminded those present that the BN government was sincere in helping the people, including those living in the rural areas, and this project was a testimony of that sincerity.

“Don’t listen to allegations that Marudi is still lagging far behind. It is not true as many longhouses now enjoy electricity, roads and soon clean water supply, especially with the building of water treatment plants in Beluru, Lapok and Sungai Peking.”

Meanwhile, Tuai Rumah Wat thanked Entri for serving the people of Marudi well during his tenure as their assemblyman.