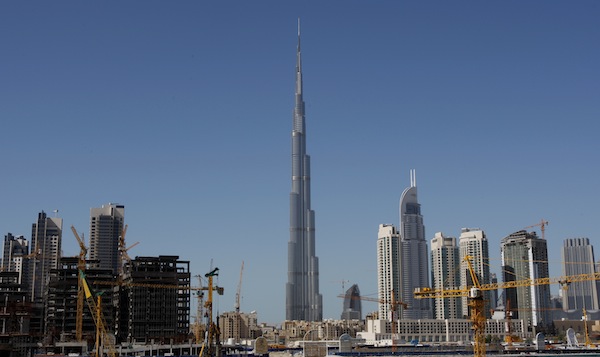 With a generous infusion of Saudi Arabian cash, officials in Beijing are planning a $1.3 billion hotel inspired by the world’s tallest building, the Burj Khalifa in Dubai, pictured. They hope the “seven-star” hotel will become a Beijing landmark, according to the Beijing Morning Post (via China Daily).

An unnamed Chinese official told AFP that the Saudis are to fund the entire hotel (whose seven stars are self-appointed, as no formal agency doles out more than five stars to hotels). It’s unknown whether the building will try to top the half-mile-tall (2,717 feet) Burj Khalifa.

Chinese leaders are no doubt hoping that their project involves no replay of the final stages of the Dubai project last January.

A few weeks after the several-times-delayed monster building finally opened to great fanfare, it closed abruptly: An elevator malfunction stranded tourists en route to the observation deck, the only part of the building open at the time. It didn’t reopen until April. And by the autumn, a mere 8 percent of the Burj Khalifa’s apartments were occupied. Rents had fallen by almost half.

There are some faint suggestions that the commercial real estate market in China could likewise be headed for a fall. A surge in skyscraper construction has some financial analysts warning that China is misallocating capital on showy projects and that the bubble will soon burst.

One Hong Kong-based analyst says there may be a correlation between the quest to build the world’s next tallest building and economic crises. “Is China building its way to a bubble?” analyst Andrew Lawrence wrote in a recent report, quoted by CNN. “It may have started with the Tower of Babel, but over the past 140 years, there appears to be an unhealthy correlation between building the world’s next tallest building and an impending financial crisis: New York 1930, Chicago 1974, Kuala Lumpur 1997 and Dubai 2010. The world’s tallest structures rarely stand alone, with skyscraper building booms coinciding with economic corrections.”

I saw this yesterday, and was trying to research into why Saudi is so good to fund the entire project, which well, they don’t normally do it for countries with different-religion, unless there is some ‘cultural’ payback or religious exchange & publicity.

It happened that the China Railway Construction Corporation Limited (CRC) won a project to build a LRT in Mecca in 2009. The project all the while didn’t go smoothly, first, the Saudis opposed non-Muslims workers constructing in Mecca, so the CRC simply convert all their workers to Islam. Supposedly all problems solved, but then the Saudis can’t make a firm decision; the standards and building requirements change frequently throughout the construction process, the Saudi authorities delayed approval of equipment and materials into the city of Mecca, and it ended up the Saudi specifies the design, systems, and other key aspects of civil engineering sub-contractors to $500 million riyals more than the contract amount.

The Mecca Monorail LRT project becomes the largest money-losing project a Chinese company ever suffered in their overseas project.

This caused friction till CRC threatening to sue the Saudi authorities for contact loss and led to slight diplomatic spat between China and Saudi Arabia. The Chinese government however, ordered CRC to resume the projects despite losses, so to send goodwill message to global Muslim populace as the LRT is designed to benefit pilgrims by transporting them quickly and more effectively throughout Mecca. China doesn’t want the millions of Muslim pilgrims visiting Mecca every year to see the abandoned project and then know it was constructed by a Chinese company.

CRC grudgingly continued the work and booked a $623 million losses on the project. This became the largest loss Chinese enterprises have ever suffered on an overseas project. When this news came out in Oct 25, CRC shares listed in Hong Kong stock exchange fell by 14% they have to suspend trading.

China doesn’t do money-losing business, I believe this is an ‘undertable exchange’ between Chinese and Saudi government.

So the Chinese government will pay for the project?
If not…the loses is too great for a company to bear…

[quote=“Athrun_zala_faith”]So the Chinese government will pay for the project?
If not…the loses is too great for a company to bear…[/quote]

but as you can see, the chinese gov’t is not stupid, pay the $623 million losses incurred, ask saudi gov’t to fund this $1.3 billion project in beijing. profit? 108% :mrgreen: