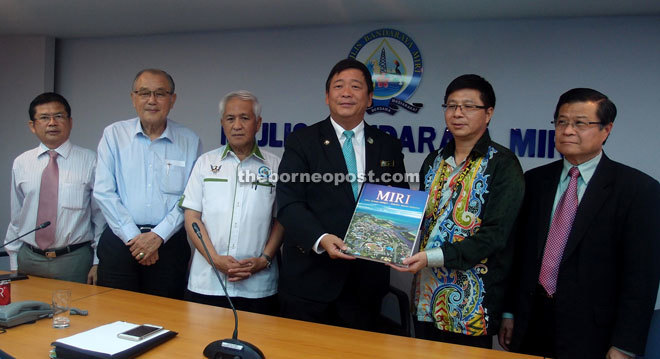 Lai (fourth left) presents a book on Miri as a souvenir to Fu while (from left) Lee, Temenggong Lee, Mohd Chee and Hii (right) look on.

MIRI: Investors from China are interested to invest in highway projects in Sarawak.

Its Consul-General in Kuching, Fu Jijun, said the projects of particular interest were the Pan Borneo Highway and the Coastal Highway.

“Since I took office early this year, I have received many positive feedback from various entrepreneur communities in China who are looking for investment opportunities in Sarawak.

“They have even submitted their investment proposals to the state government, including the two mega highway projects of Pan Borneo Highway and Coastal Highway,” he said at a dialogue session with representatives of various Chinese community associations and individuals at Miri City Council (MCC) premises yesterday.

The dialogue session, organised by the MCC was attended by Chinese community leaders, Federation of Chinese Associations Sarawak of Miri Division, Miri Chinese Chamber of Commerce and Industry (MCCI) and many others.

Besides the two mega highway projects, Fu said the (China’s) investors saw great potential in other areas such as steel, paper and herb.

He added that China was also going to build a friendship city with Sarawak in an effort to foster closer cooperation in culture, tourism and education among others.

Touching on the current slowdown of economic activities due to the drop of oil prices in the world market, he said it also affected China and Malaysia’s economic development particularly in the oil-related industries.

Even so, he said China and Malaysia were able to maintain positive Gross Domestic Product (GDP) compared with many other countries.

He thus said there was a need for people in both countries to work harder to sustain the positive growth.

Miri Mayor Lawrence Lai, in his address earlier, said the council viewed positively any cooperation with China to lure more business investments to the Resort City.

He said Miri was looking for an opportunity to work with China to explore (Miri’s) potential in agriculture, poultry, fisheries, forests, education, tourism and cultural interactions.