China buying billions worth of Iranian oil with 315 subway cars

A senior Iranian official says the country has ordered 315 subway cars from China in place of payment for oil that cant be transferred due to sanctions. Amir Jafarpour, who is deputy head of the Transportation and Fuel Management Committee, says officials were forced to order the coaches because billions of dollars of payments from crude oil exports to China have not been transferred to Iran due to international sanctions. The U.S. and its allies have imposed oil and banking sanctions against Iran over its disputed nuclear program. As a result, Iran has frequently turned to barter arrangements over difficulties with money transfers. China is currently Irans top crude oil importer. Needless to say, it is also the sole winner in the trade - receiving Iranian oil on one end and yet able to export its manufactures to Iran on the other.

Irans economy is heavily dependent on oil sales, and the sanction has led to billions of dollars in lost revenue and a plunge in the value of the national currency. Taking advantage of Irans limited choice, China is using Saudi Arabia to pressure Iran in the price bargaining process. China, now the biggest oil customer of Saudi Arabia, is utilizing the extra Saudi supply as leverage to bring down the cost of Iranian oil it is buying.

“The Chinese want a better price and is putting pressure on the Iranians by saying ‘look, we can actually buy from someone else’,” said Samuel Ciszuk, a consultant at KBC Energy Economics. Chinese refiners are already taking advantage of the mounting pressure by demanding 10 to 20 percent discounts and better terms on Iranian crude, oil analysts and sanctions advocates said in interviews.

Mark Dubowitz, director of the Iran Energy Project at the Foundation for Defense of Democracies, an advocacy group in Washington estimates that if the sanctions intensified and China was left the only remaining buyer of Iranian crude, it might even command as much as 40 percent discounts. Among the other major buyers of Iranian oil, India has increased orders from Saudi Arabia, and Japanese and South Korean officials say they are gradually reducing their dependence on Iran. 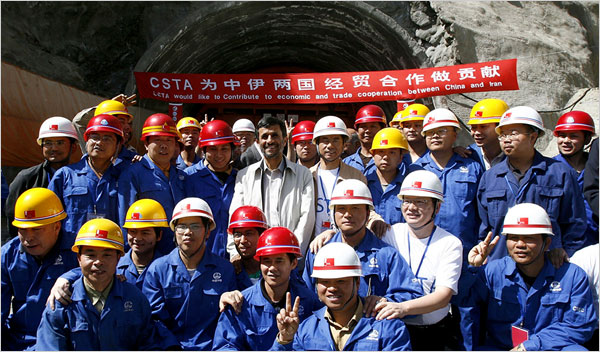 Iran: China is our true friend who helped us in toughest time

The Chinese are effectively exploiting Irans weakness by demanding price cuts, Dubowitz added. “They are forcing the Iranians to offer these price discounts to compensate for added political and legal risk.” In that sense, China stands to be the biggest beneficiary of U.S. and European plans for sanctions against Iran.

A clear example of the Chinese ingenuity in business that makes them the envy of others, that’s why they are making waves with their in roads in Dark Africa.

Although it might seem unfair to some…but a business is all about making money.

i can see someone in the office was happy about the account gain a few figures.