MIRI: It was a joyous night rich with music ranging from jazz, ballad to pop and dances to the strains of Latin, rhumba to cha cha cha and Zumba steaming up the stage.

In return, the rounds of applause from the 1,000-strong audience marked the huge success of the charity concert organised by Malaysian Diabetes Association Miri Branch last Saturday.

Held at the ballroom of Meritz Hotel Miri, the concert themed ‘We Care’, saw four hours of non-stop performances from a long line of local talents including Malaysian renowned songster Chng Shyue Chong and songstress Boon Wei Wei, who made an appearance for the good cause.

“It wouldn’t be the same without the support of everyone in this ballroom, and as we know that this concert is mainly about music and a good cause – diabetes, let’s tribute it as such,” she remarked.

Ting, who has gifted vocals, also belted out a few tunes of 80s oldies, as her way to express her gratitude.

Ting was also joined in by the likes of local prominent figures Kapitan Jee Kee Hiong, renowned vocal instructor and songstress Wong Shiau Wei; Meritz Hotel and Bintang Megamall general manager John Teo, among others, belting out tunes that mesmerized everyone in the ballroom.

Making his remarks prior to the launch, Datuk Sebastian Ting urged the people at large to adopt a healthier lifestyle like cutting down on a sugary diet.

“In Malaysia, statistics show that 17.5 per cent of the adult population is facing diabetic problem. Meanwhile, according to World Health Organisation (WHO) statistics, the number of adults having diabetic challenges has multiplied by four times from 108 million in 1980 to 422 million people in 2014. This is a worrying yet important trend to be taken into concern, as we know that diabetes can lead to other health complications that could end in death,” Ting said.

Therefore, he added, the cause promoted by the Malaysian Diabetes Association must not be taken lightly.

“It deserves due attention because there are still many who may not understand, and have neglected the health issue.”

Ting said the support for the charity dinner and mini concert marks the first step to success in promoting awareness on diabetes.

The night wrapped up with the amazing performances and songs by Chng Shyue Chong who also took the opportunity to give away his signed albums to fans. 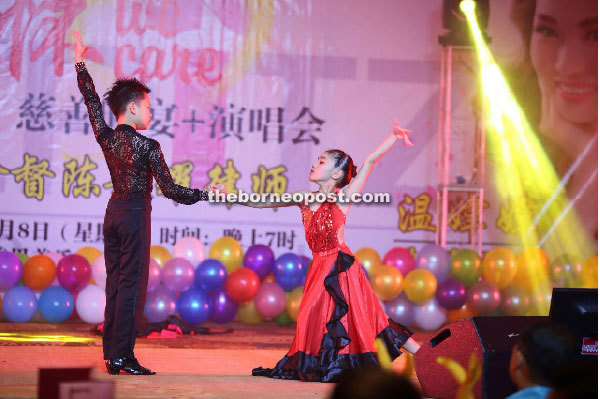 Young dancers from Broadway Dance Studio performing Paso Doble, a lively dance style modelled after the sound, drama and movement of the Spanish and Portuguese bullfight.