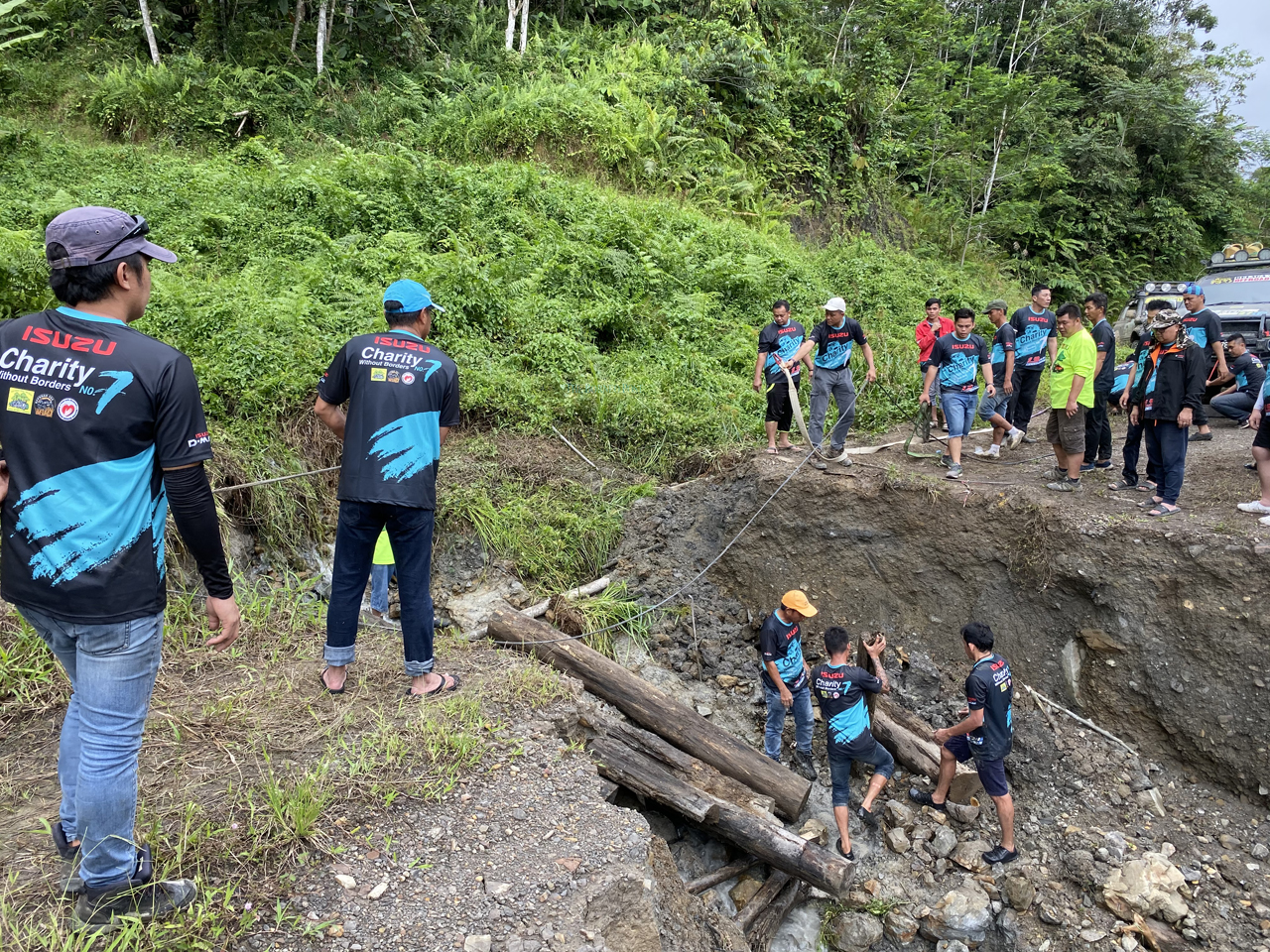 The convoy tackles the challenge of fixing one of the broken bridges. 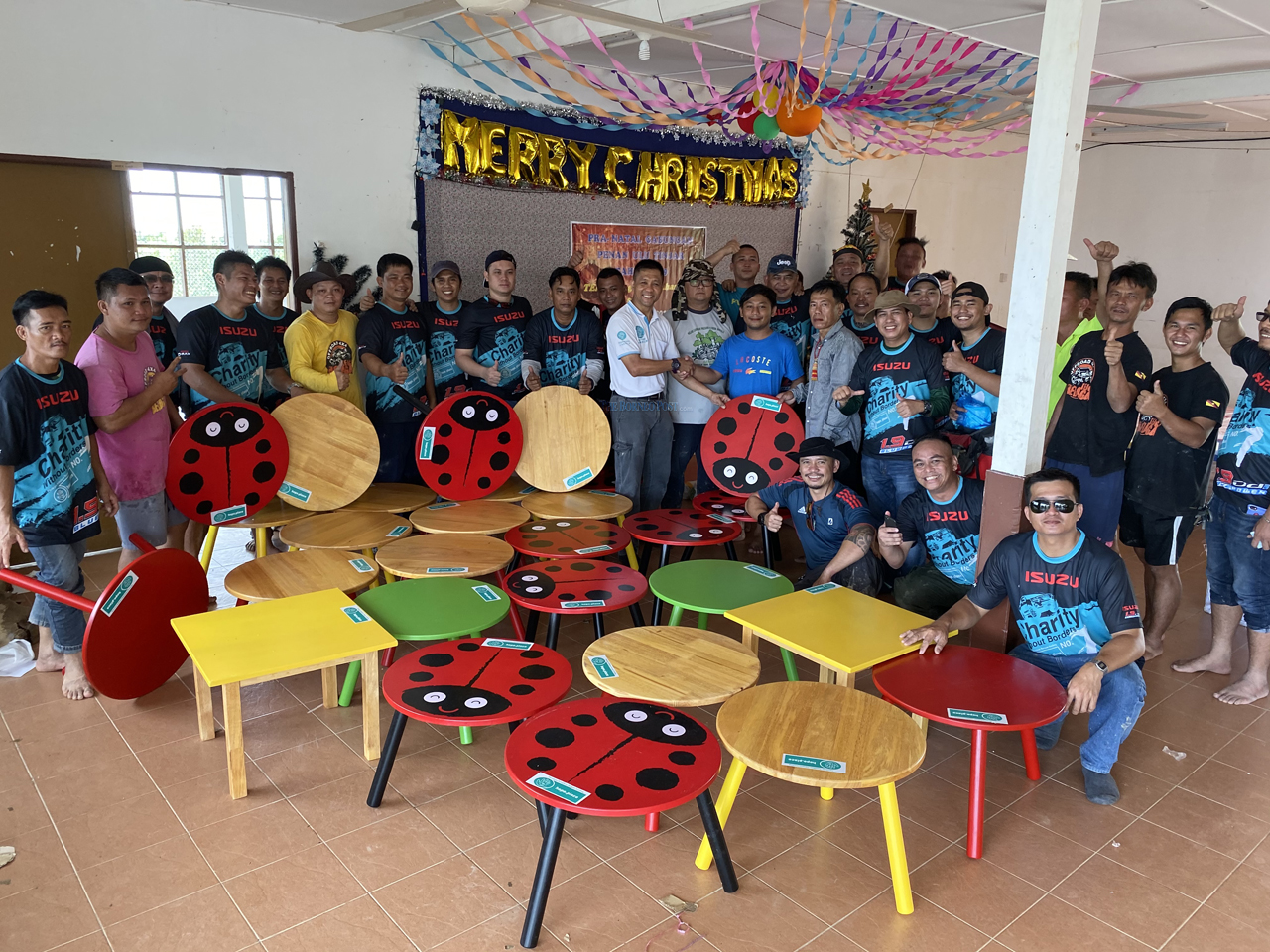 The volunteers at the learning centre in Apau Nyaring. 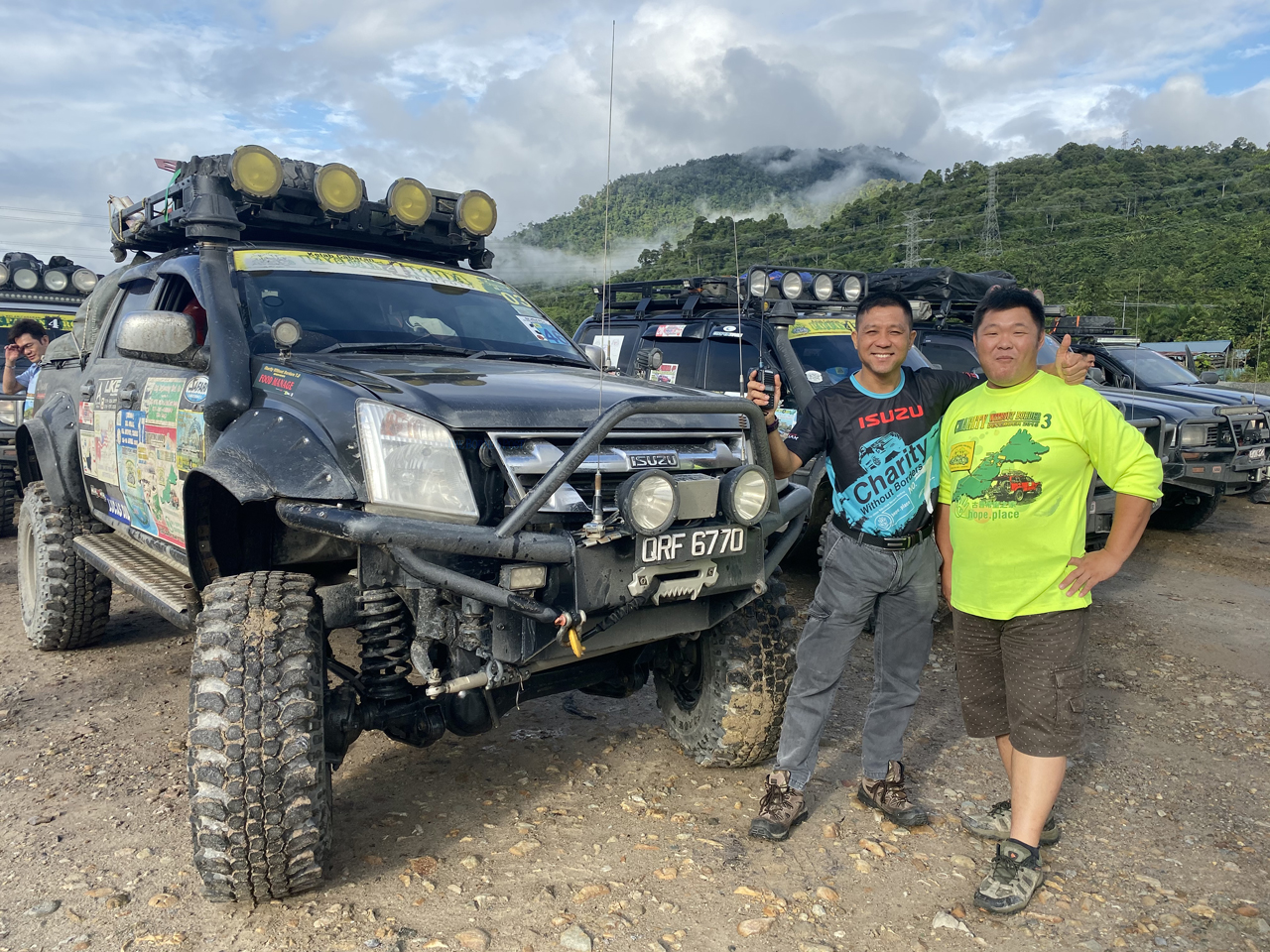 Hope Place Kuching founder Kelvin Wan (left) with a representative from Isuzu Malaysia, which is one of the sponsors of the charity expedition.

KUCHING: Hope Place Kuching’s annual charity four-wheel drive vehicle (4WD) expedition had conducted its journey into the interiors of Ulu Tinjar in Baram with much success.

Run together with Kelab Cabaran Pacuan 4-Roda Bintulu, this year’s ‘Charity Without Borders (CWB)’ convoy comprised more than 150 volunteers on board 82 modified trucks.

They visited three Penan villages that were without electricity and treated water supply.

Besides Bintulu, other club members were from Belaga who came on board 18 vehicles, Batu Niah (four vehicles), Sibu (16 vehicles), and those coming on board two vehicles
each from Sri Aman, Miri and Kuching.

Representatives of Bintulu Health Department and some volunteers from Kuala Lumpur also joined the convoy this year.

Their toughest challenge was crossing four broken bridges along the journey.

The first and fourth bridges were completely broken – it took all 82 trucks two and half hours to cross the first bridge, and seven gruelling hours to pass the fourth bridge.

They were able to repair the second and third bridges.

Following this harrowing experience, 20 trucks broke down – all were able to be repaired, except one, which had to be left behind at the Apau Nyaring village.

The truckers would return for that one 4WD once the expedition concluded.

The first village that they stopped over was Long Telepe Urun, a 41-door longhouse.

The team gave to the villagers food items, including powdered milk for the children, as well as toothpastes and toothbrushes to all of them.

The volunteers also gave away toys as Christmas gifts to the village children.

The second Penan village was the 43-door Apau Nyaring. There, members of Kelab Cabaran Pacuan 4-Roda Bintulu donated to the village a water pipe worth RM11,000.

This village only had a makeshift learning centre for children aged four to 12 years.

There, the villagers also received food aid, toothpastes and toothbrushes, as well as Christmas gifts for their children.

The convoy members were able to spend more time there and as such, they took time to arrange all the study desks, gave a wheelchair to an elderly villager and taught the children the proper way of brushing their teeth.

The convoy arrived at the village of Long Liaw along Tinjar River. There, all the food aid and Christmas presentes were loaded into 10 longboats.

It took them one and half hours to reach Long Liaw.

Hope Place Kuching paid for all of the fuel expenses for the longboats.

A wheelchair was also given to an elderly villager.

The CWB convoy arrived back in Bintulu town at 1am on Monday.

Hope Place Kuching expressed heartfelt thanks to all sponsors, donors and volunteers for their generosity and efforts in making this expedition a success, particularly to Isuzu Malaysia for its sponsorship of food aid worth RM14,000.

In addition, Hope Place Kuching managed to raise RM60,000 worth of food aid for Ulu Tinjar this year.

Christmas gifts for the village children.