‘Change of mindset vital to ensure success of campaign’ 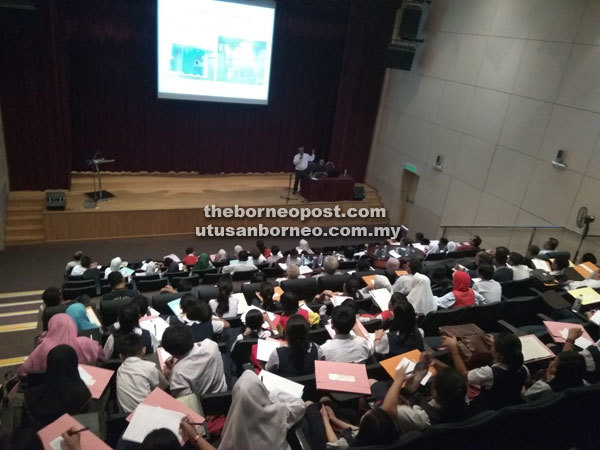 Students take notes as one of the speakers present his papers on stage during the seminar.

MIRI: The campaign on clean drains by the Miri City Council (MCC) could only achieve its target if members of the public fully support the initiative by avoiding habits that contribute to clogging, blockage and stagnation.

According to MCC assistant officer (public health) Gandau Naga, changing the mentality of some people remains a great challenge to the council when it comes to ensuring the cleanliness of drains across the city.

“Dirty drains – or ‘drain pollution’ – have become a common sight here. There are a lot of waste filling these drains up – a situation that is not only an eyesore, but also a health hazard to humans and animals,” he spoke at a seminar on keeping drains clean at Pustaka Miri yesterday, conducted by Local Agenda 21 (LA21) Unit of MCC and involved more than 170 local primary and secondary school students.

Gandau said a lot of factors contributed to drain pollution such as the indiscriminate disposal of used cooking oil, as well as materials made from plastic and paper.

“Dumping waste is easy, but cleaning up the mess takes a lot of manpower, energy, time and of course, money.”

In this regard, Gandau pointed out ongoing measures by MCC to address the problem such as enforcing the usage of grease traps and strainers on the kitchen sinks to filter out the waste and prevent it from going down the drain.

“Thus, it is important to get the cooperation from operators of restaurants, coffee shops and other eateries, as these places are those that produce tonnes of food waste compared with those from housing areas.”

Another measure to counter drain pollution, said Gandau, was regular flushing of drains.

“This is usually scheduled to appointed contractors. It is also important for these drains to be properly covered to prevent some irresponsible people from throwing rubbish into them.”

Gandau also pointed out the risks of leaving the water to become stagnant.

“The stagnant water in clogged drains is the perfect breeding ground for mosquitoes. To treat this, council workers would first spray a mild solution of steriliser to kill the larvae before they could unclog the drains.

“There have been questions about whether such method could harm humans and other aquatic life – we assure you that it (steriliser) only acts against the larvae.”

Gandau also took the opportunity from the seminar to show to the participants some photos of clean and beautiful drains in Japan and Korea.

“Indeed, the drains in Japan and Korea are so clean, even schools of fishes live in it. We are working the best we can, hoping that the members of the public would give their full support to realise this for our city as well,” he said.