Ceremony held for exhumation of graves 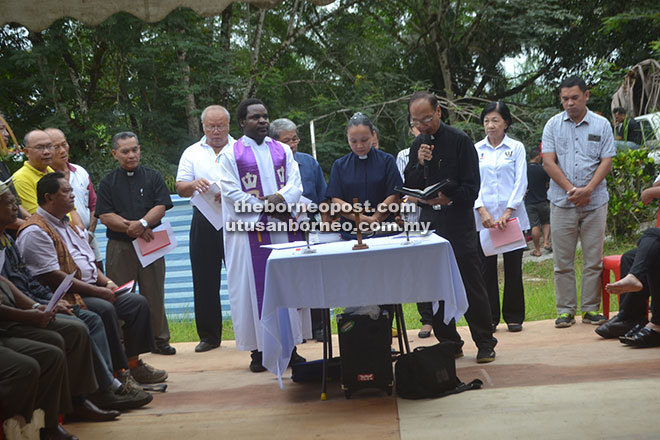 KAPIT: Sept 10, 2016 marked an historic day for Kapit town because it was the first time the town witnessed the removal of six graves from their original site for the purpose of development.

District officer Elvis Didit said this during the exhumation of the six graves in front of the former Kapit district officer’s quarters along Jalan Memora which were moved to the Kapit District Council cemetery at KM3 Jalan Selirik.

A special prayer and offering (miring) were held before the graves were exhumed.

“I hope with the prayer and offering today, the souls of the departed will rest in peace. We have six known graves there but we have not identified the descendants of one of them.

“If someone feels they are the descendant of the deceased, they can contact me even after the moving of the graves to the new site,” he said.

He said they expected to complete the exhumation yesterday and early this morning they would bring the remains of the deceased to the new cemetery.

One of the graves belonged to Janar De Rozario, a Portuguese who died on Dec 29, 1883 and his daughter Florence Louisa Rozario who was born on June 26, 1872 and died on January 26, 1873. Father and daughter were buried in the same grave.

Six-month-old Iban boy Michael Anak Enjop, the fourth child of Sarawak administrative officer the late Austin Enjop Jarraw who served at Kapit District Office from 1954 to 1978 was also buried there.

Remit and Lemi were buried side by side. Another grave belonged to a Chinese man identified as Lau Ah Kui. However, one grave could not be identified.